Showing posts from May, 2011
Show all

By Courtney Espejo - May 31, 2011
I've been seeing this everywhere and thought it was a fun idea.
The Thirty-Day Challenge:
1. 15 facts about me

3. A recent photo and a photo from 10 years ago 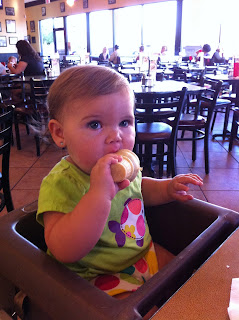 ...Grace got her first ice cream cone. She really liked it...even more so when she discovered she could squeeze it and her fingers would go through the cone. Then she asked for mine. I let her hold it, and she squished mine too:


...Grace went to pre-school for the first time and hated it.
...she gave Cash lots of hugs:


...I put Grace in her pack n' play to nap and she started crying. I was starving, so I ate some lunch really quick and when I came back to check on her she was passed out like this:

...I tried to teach Grace to say Olivia:


...Isaac ate lunch with Grace since she's been hanging out at the office lately:

...she loves her Tinkerbell movie and alternates it with The Little Mermaid while we work:

...she's gotten reallllly good at walking. Baby girl can practically run. She has a certain path she likes to take around the furniture and follows it over and over again:

...she passed out on the couch at our Friday nig…
Read more

On Saturday, Isaac, Grace, and I decided to take a trip to the Shark Reef at Mandalay Bay.
We invited Kasie and Jeremy to come with because we always have the best time with them.
We started off with lunch at Border Grill where Kasie and I had the most delicious strawberry mojitos ever:

Next, we headed over to the Shark Reef and got our tickets:

Inside, we saw a crocodile:

And a Komodo Dragon:

There were some massive fish:

And some smaller fish:

We even saw some piranha:

Grace liked watching them swim around:

There was a pretty cool tunnel where you could see all different types of fish and sharks:

It was kindaaaa creepy to walk through though:

Isaac and Jeremy didn't seem to mind it:

After the tunnel, there was a touch pool where you could actually feel some sting rays:

Some of them were shy:

Next up was the best part...jelly fish! They were so beautiful and colorful:

Last up was the big ship wreck area with tons of different, crazy looking sharks, fish, and rays: 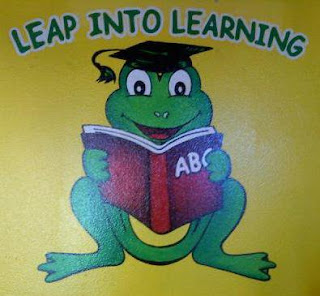 Isaac and I have always said that we want Grace to go to pre-school.
We feel like she'll learn so much more and have better social skills if she's around kids her own age a couple of times a week.
This would also give my mom a break from watching her every single day.
Plus, who doesn't want to have a few friends to play with, right?
I went for years when I was a kid and absolutelyloved it.

Since she's about to turn one, we started looking into them to be sure we chose the right one.
There is a new one called "Leap Into Learning" right next to our office, so we thought that would be perfect.
It seemed nice, clean, and the teachers played a lot with the kids.
We decided that once we get back from Nashville, and her first birthday passes, we will put her in there two days a week.
My mom suggested that we take her for a couple of hours a few times before then to get her used to it.
Tuesday, she got dropped off at 10:30.
My mom took her and said that she cried when she lef…
Read more 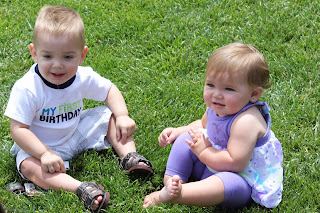 Grace's friend Brodin turned one(already?) on May 19th, so we went to the park to celebrate his first birthday.
We were super excited to see him and his family.
It was gorgeous out and Grace couldn't wait to play.
She and Brodin hung out in the grass, which Grace obviously didn't like too much:
(see foot being held up in the air)

Then Grace practiced her walking skills:

She's really getting pretty good at it.

She drank some juice and showed off "the lip":


Grace hung out with Grammy:

Walked around with Daddy:


And played cars with Brodin:


Then she stole his juice box:
(Little stinker!!!)
Brodin got a cool new quad for his birthday, so he and Grace both tried it out:

Then, Brodin got to open all of his other presents and the pinata. He had fun grabbing all of the candy that fell:

Next up was the cake. Brodin wasn't too sure about it at first, but he still got into it: