Showing posts from January, 2013
Show all 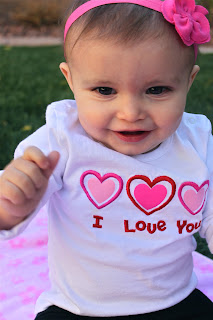 Charley is hitting milestones and the Runnin' Rebs season is in full swing.

I really love my Rebs, but they've really been freaking me out lately. I went into this season with high expectations, yet they continue to lose on the road. C'mon guys...I'm really going to need you to run the table for the rest of the season in hopes of a decent seed in the tourney. Puh-lease!

Also, it's late at night, and I'm super tired. So sorry if this post goes off on more than one tangent.

Charley has officially been living outside of my belly for as long as she was baking on the inside.
We're talking nine whole months!
She is still 18.5 pounds. Actually, she's eighteen pounds and ten ounces. She gained two whole ounces this month! So, she's still four pounds lighter than Gracie was at nine months. Crazy stuff.

She's also about twenty-seven and a half inches tall. That's the same h…
Read more 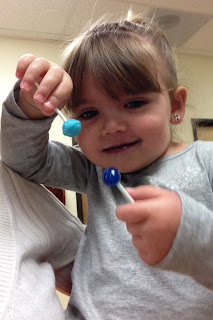 ...Grace was still sick. (Last week, I told you all about her coming down with something.) When Grandma Lisa showed up to watch her on Monday, there was no way Grace was letting me leave. She felt terrible, was whining and crying, and only wanted Mommy to hold her. Of course I obliged. I gave her some Motrin to help with the fever, and in about an hour she was dancing around and coloring. I decided this was a good time to go. Around two o'clock, Lisa called to let me know that Grace had been crying for about and hour and only wanted Mommy. I buttoned up a few things and headed home to take care of my baby.
I called Dr. Vu's office, and luckily, he was able to see her that afternoon. Aunt Geni came over to stay with Charley, and I took Grace to the doctor. A nurse saw us first, mentioning that Grace may have the flu and RSV. She said Dr. Vu would come take a swab test and let me know. When the doctor came in, he checked her out and said that her little cough had settled in her…
Read more
More posts