By Courtney Espejo - February 06, 2011
...we went to visit Grandma and Poppa on Monday after work. It's been a few weeks since we've seen them, so I picked Grace up, and we headed over there. She had fun playing in grandma's wheelchair: 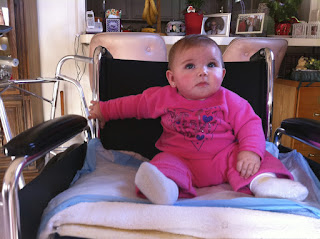 Poppa even pushed her around for a bit. It really wore her out, and she soon passed out: 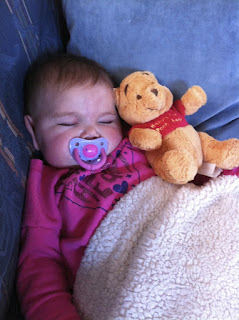 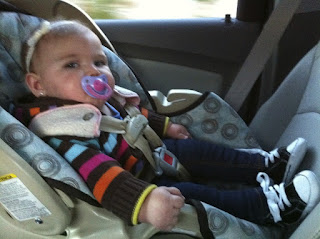 It really is an event because her feet are just way too fat too big to fit in them.
Kasie bought these shoes before I was even pregnant. It was no secret that Isaac and I wanted to have a baby right after we got married, so she gave them to us and said they'd bring us good luck. Apparently they worked. We bought her a size (or two) bigger and still can't get them on all the way.
...I couldn't resist taking a picture of her in this cute little jacket: 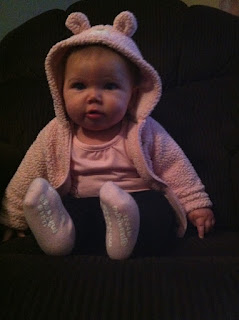 (adorable, right?)
...Grace started playing in her Pack 'n Play in the afternoons. 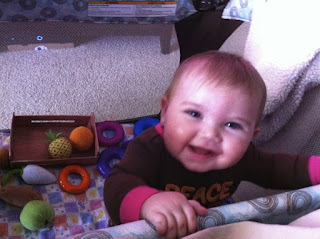 I used to just put her on the floor with some toys, but since she's SOO cLoSe to crawling, we needed a change.
zsjhghdnd hg  j txgfc njfgcbu hjh kug nnnnnnnnnnnn bbb bb
Yah...that's what happens when I try blogging in bed with Grace by my side.
I think she's trying to say NOT.GOING.TO.HAPPEN.
She also came DanGeRouSly close to deleting all of my pictures.
Anyways...
Since she's about to crawl, I'm a little nervous that I'll set her down and then not be able to find her once she crawls off somewhere. I've also been making her nap in there instead of her usual spot...my bed. I can just imagine her crawling off the edge, so from now she's only allowed to sleep in there when Daddy and me are on either side of her.
...Grace learned how to clap!
Such a smarty pants.
We also went to the Cantor's house to watch the Superbowl on Sunday.
Stay tuned for an update on that.
Grace Weekly Update