Every Now and Then

By Courtney Espejo - February 27, 2011
Although I haven't blogged about it in a while, Kasie and I have been continuing our tradition of cooking dinner together every Friday night.
I must say that I feel like I am becoming a much better cook (my list of dinner dishes now consists of much more than tacos and macaroni with cheese)!
However, this past week, we decided that it'd be nice to take a break from cooking and go grab some sushi.
Since Isaac has been working an insane amount of hours lately (seriously SLAMMED at work...which is a GrEaT thing I suppose), he was all about the sake.
First thing when we sat down at the table, Isaac ordered up some Sapporo and sake for the four of us.
We got everything ready and started in on the sake bombs.
This is probably a little irresponsible pretty hilarious considering the fact that we were sitting in a quiet restaurant with older people all around, AND a baby in a highchair was also sitting at our table.
Isaac insisted that we yell "SAKEEEEE" whenever we'd take a drink.
Of course I had to grab a few quick pictures.
Kasie and her sake bomb: 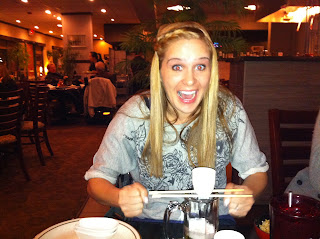 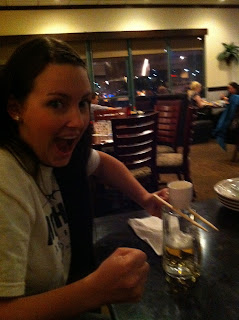 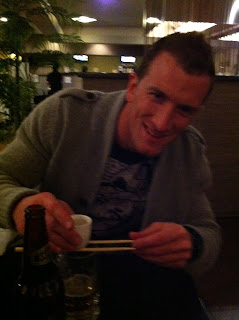 After a few sake bombs and some delicious sushi, we got the most amazing fortunes in our fortune cookies: 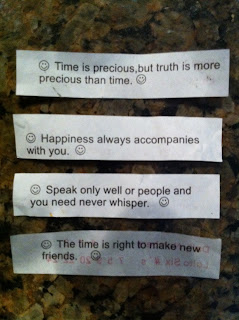 (Kasie's, Mine, Isaac's, Jeremy's)
Seriously?
Seriously!
We don't know what they mean either.
After getting those awesome fortunes, we decided to take the party back to our place.
Isaac and I stopped by the store to grab some Sapporo to go with the bottle of sake that we conveniently had sitting at home, while Kasie and Jeremy rented a movie.
We pulled up to the house, gave Grace a bath, put her to bed, and enjoyed some more sake bombs: 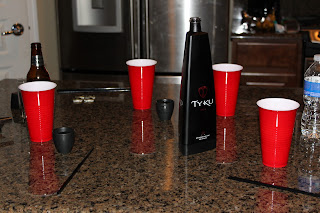 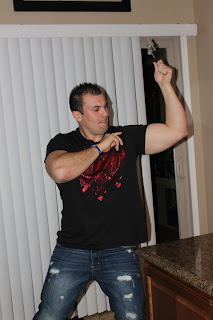 (Don't worry, it was really a can opener.)
Somehow, this led to us pulling out old pictures from high school and reminiscing about our adolescence.
We didn't end up watching the movie until Saturday when we also continued our journey through high school by reading all of the "autographs" in our year books and showing Jeremy what big dorks we were throughout the years.
Such a fun weekend.
I'm so glad that Kasie and I have been able to stay friends for so long and grow even closer as the years have passed.
It was crazy to see how far we've come from those little kids in sixth grade to such serious (but not that serious) grown-ups with engagements, marriages, and even a baby.
I'm glad we can still have a little fun every now and then (love you Kas)!
Friends