By Courtney Espejo - May 14, 2012
I'm officially in birthday planning mode.

Grace is going to be TWO in just a month.

She's such a mini adult: 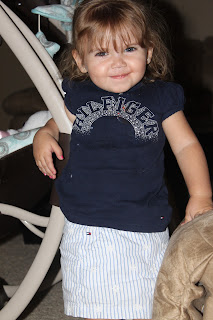 I can't even believe she used to be as small as Charley!

Grace is now sleeping in her own bed all night. She falls asleep with us, but once we move her to her own bed, she stays there all night long.

She's also in panties full time. She still has accidents in the middle of the night once in a while, but it's easy to wash her sheet and the waterproof mattress pad. We're officially done with diapers with this one!!

Grace has also learned to roll her eyes this month. It's hilarious when I tell her she's cute and she rolls her eyes at me. Such a diva!

She tells us she's ready to "go to bet" around 7:30 every night and even around 1:00 every day when she wants to take her nap (I love pre-school for this one).

Grace is totally obsessed with pouches. If you don't know what they are and you have kids, you're totally missing out. It's the easiest way to get her a healthy snack because you don't have to do anything. Just take the lid off and give it to her. They have tons of flavors and consists of organic fruit and yogurt. Elmo (strawberry banana) is her favorite.

She loves to watch people come and go out the window in her play house. It sits right against our front window, so whenever someone leaves she runs in there and watches them drive away. It's so cute.

Mary Poppins is easily her favorite movie. She sings "medicine go down" very well, and she and Daddy have a special dance they do with the penguins. (I'll have to sneak a video of this one!)

She eats steak, but not many other meats. I did get her to eat some chicken from Teriyaki Madness by promising ice cream when she finished her bowl.

She currently weighs twenty-seven pounds. We go to the doctor at two months for a wellness check up, so we'll see how she's doing a little better at that time.

She has turned into a parrot. This kid repeats every single thing that is said around her. If she can't pronounce some words she just mumbles nothing and says the ones she can. She even copies your facial expressions you made while you were speaking.

She's trying so hard to jump, but can't get the concept of both feet coming up at once yet. It's pretty funny to watcher her try.

Last but not least, Grace is now a BIG SISTER! She's the best at it too. She totally loves Charley and shushes her and tells her it'll be ok when she cries (which is rare). She loves to hold her hands, rub her head, and try to pick her up. Grace also lights up when she gets to hold Charley on her lap. She's so in love, and I just know that they will be best friends!