By Courtney Espejo - April 05, 2017
Guys, little Perry Lou is eleven months old. First birthday planning is in full effect, and it's so bittersweet. 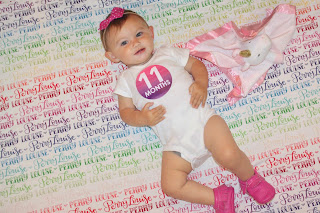 My littlest gal has grown so much this month. Not on the charts, but in every other way. She's eating everything, talking more, and taking more steps each day.

This month, Perry didn't gain much and is weighing in at eighteen pounds, two ounces. She's standing at twenty-eight inches tall. Baby still has a little bit of squish to her, but she has really leaned out, and is such a petite little thing. 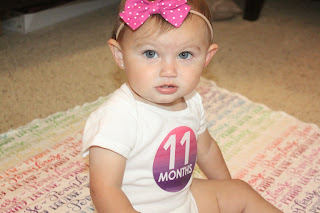 Perr Bear is wearing size 12 months in most things, but we've started to move into 12-18 for summer styles. They're a little big on her, but they work. She's still in between size two and three in her moccasins and can easily wear both. She wears a size four diaper and is pretty solid in those currently. 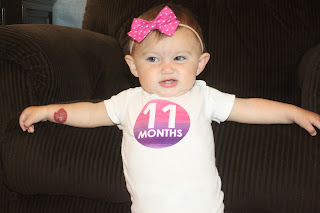 This month, Perry is loving to eat peaches, black beans and rice, Cheerios, scrambled eggs, watermelon, and anything carb related. She will eat pouches and hasn't turned one down yet. She likes to take her time with little bites here and there and always wants to hold it by herself (which usually results in a mess). She is still taking two bottles at school, and eats breakfast, lunch, and two snacks of regular food while she's there. They have started to transition her from the swing to the crib for her afternoon nap, and she seems to be doing pretty well with it. 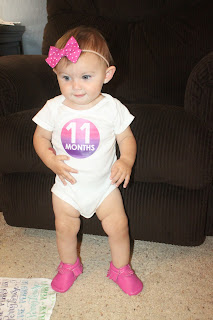 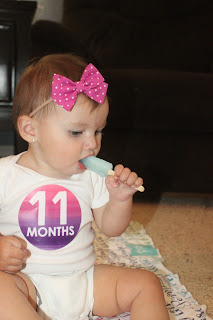 Perry loves to be outside and watch her sisters and the Sebastian boys ride their bikes around. She sits in her wagon and tries to walk around to keep up with them. Speaking of walking, Perry took her first steps this month. She can take about ten-twenty in a row before losing her balance and plopping down. Most of the time, she'll just slowly lower into a crawl, because she knows she can get where she's going much faster that way. She can easily walk, but we aren't calling her a walker just yet, because it's not her preferred method of travel at this point. 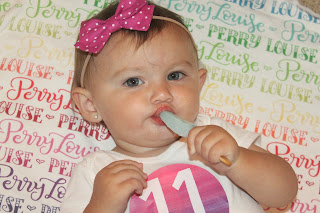 This baby is the sweetest thing. She loves to lay her head on your shoulder, gives kisses without being asked, and pats your back when you pick her up. She's such a little angel and melts us all with her toothy grin. She loves to point at everything, and her blankies are still her most favorite thing. She loves to watch movies and putting on Moana while she's in her swing will almost guarantee you a nap. She also likes Trolls and Sing and has even been watching Hop with her sisters. 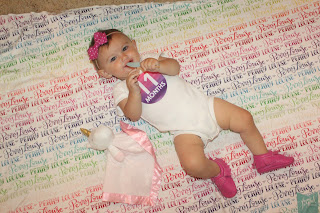 She has started saying more sounds like nah nah, ba ba, and her new favorite, ack. She crawls around and says "ack", and I always ask her if she's quacking like a little duck. She still knows mama and dada, has her own way of calling to Char Char and Gracie, and she has called JJ by his name twice. She has also said "ahh done" a couple of times, which is the cutest. 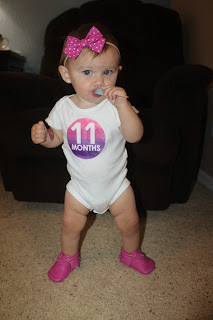 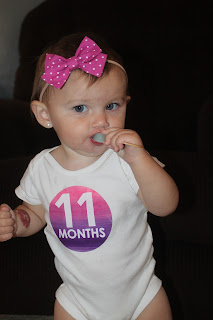 She has recently taken to dancing and loves to bounce her tush up and down. She also gets super excited and claps and then swings her arms around with her hands clasped together. Girlfriend loves her some music. Perr also loves to read and will flip through books forever. The Jellycat ones are her favorites, and she likes to take your finger and make you touch the touchy-feely part on each page. 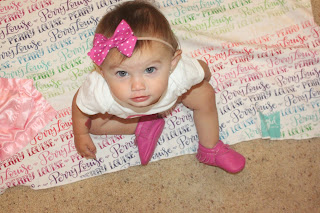 She doesn't have any new teeth this month, and there have been no signs of any new ones coming in, so we're still at six total: four on top, two on bottom. Baby girl did get her first ear infection and her first round of antibiotics this month. She did fine with them, and is back to her normal, happy self. 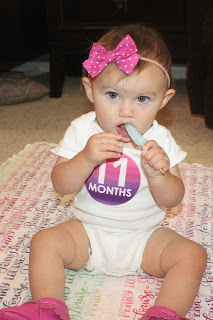 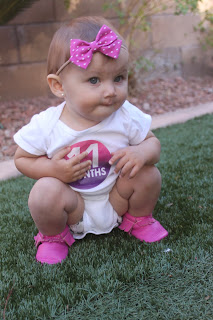 Since the days have gotten longer, Perry can stay awake a little later in the evenings. She still prefers her six-thirty bed time. I think it has to do with the fact that her nap at school goes from twelve to two. She's pretty exhausted when six o'clock rolls around, and I usually give her a bath around that time. She loves to play in the bath and splash with her bath toys while listening to Baby Beluga play in the background. I love this song and have sang it to each of my girls as my Grandpa Jesse used to play it for us when we were little. 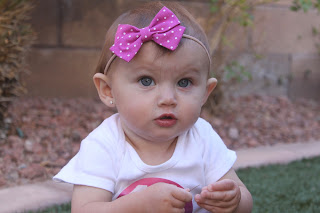 We are having so much fun watching this little one learn and grow. It's also to fun to watch Grace and Charley as they watch their baby sister learn new things. She always has them giggling with her or giving her kisses. They are all so sweet on one another, and it melts my heart to watch them all interact. 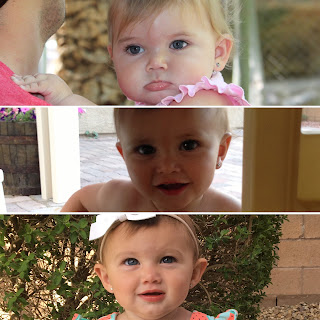