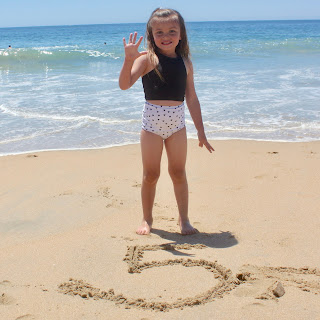 This girl has grown and changed so much over the past couple of months. She's lost her toddler look and is total big girl status these days. (She does still have her chipmunk voice, so at least I can hang on to that.)

Charley will be starting Kindergarten soon, and we have her orientation this upcoming weekend. I'm not ready for that. With Grace, I was so excited. Charley still feels like a baby to me. She, on the other hand, cannot wait to join her big sis and the Sebastian boys at school every day.

Charley recently had a doctor's appointment where they told her she didn't need any shots, and she was so happy after anticipating them all day. She weighed in at forty pounds and stands forty-four inches tall. She's in the fiftieth percentile for weight and the seventy-fifth for height.

She is in size five in almost everything and is wearing a size ten in shoes. Char loves her dresses and hates when I pick out pants for her. She also has a bow in her hair at all times, even when she sleeps at night, and pig tails are her very favorite (mostly because that means I won't be doing any braids).

We did our annual twenty questions about her current favorite things, and every answer was predictable. This girl knows what she likes.

She talks loudly almost all the time. I'm constantly telling her that we don't need to yell, but I think that comes with trying to talk over her big sister a lot. She always says, "Mommy? I love you." Like, ten times a day. She's super sweet and super strong. Char is a natural at soccer and averaged four goals this season. She's speedy and agile, and she loves to win.

Baby girl loves to watch movies. I'll tell her to go upstairs for something, and when I call to her thirty minutes later, she's either fallen asleep or engrossed in her iPad. She's currently loving Trolls and Moana as evidenced by her birthday video. Girlfriend can't get enough of her naps. She still takes a one to two hour nap every afternoon and falls asleep in the car on the regular.

Being a big sister has really made Charley shine. She LOVES her baby sis and wants to hold her, kiss her, and play with her every second of the day. Their bond is amazing, and Perry loves her Char Char just as much, They can almost always be found giggling in a blanket fort.

Char is always singing whether it's her favorite song from the radio or just her making up her own words to whatever it is that she's doing at the moment. You'll hear her belt out a tune in the shower, while she's eating, and even when she's sitting on the toilet (we always say she's just like her uncle Zacarias in that aspect - along with looking a lot like him).

Char still loves her mac and cheese, but she's recently branched out and loves chicken, tacos, avocados, and turkey sandwiches. She doesn't love tomatoes like the rest of us, but she can get down on some ranch and will dip everything in it. She also loves egg and ham breakfast burritos and drinks chocolate milk like it's going out of style.

It's gotten increasingly hard to write down all of the silly things these kids say daily, but here are a few that I've jotted down over the past year:

After jumping in the pool during swim lessons last summer - "I didn't even drown!"

Driving home from school - "Mom, can you please put another song on? I don't love this one."

Listening to her teammates call her soccer coach "teacher" - "It's not teacher. It's coach!"

When her hands are full - "I have too many hands!"

When something runs out - "It's wasted out."

Discussing which restaurant to go to for dinner - "Do they have tiny cups?"

"I had a beautiful dream last night. I was looking for a flower, and I found it. Then I put them all on my dress so I could look fantastic to dance!"

She is always questioning everything, and asks me how things work or why people do the things they do. A recent questions was, "How does the TV work when you push the buttons on the remote?" I told her I didn't know, and Grace responded, "I'm probably smarter than you, mom." She then proceeded to explain to Charley what she thought she knew about the subject.

She filled out a questionnaire at school about me for Mother's Day. My favorite part was that I always tell her to be nice to everyone and say thank you and you're welcome.

This little girl has my heart, and she almost always gets whatever she wants. She knows how to work both Daddy and Mommy. I envision her being the one that Grace and Perry use to get what they want when they're older. "No, you go ask Mom, Charley!"

I can't believe it's been five whole years since we welcomed her into our family with open arms. It feels like just yesterday we were lying on the bed watching Grace shake her tush as baby Char smiled up at her. Where does the time go?

We love you so much, baby girl.
Birthdays Charley Milestones 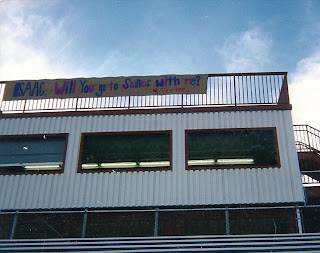