By Courtney Espejo - November 30, 2013
While reading my past blog post about Grace, Isaac and I couldn't believe how similar our girls are at the nineteenth month mark.
The biggest difference lies in their size. Charley is twenty-four pounds, seven ounces and stands thirty-two inches tall. She hits exactly in the fiftieth percentile for both weight and height - the perfect baby. (How weird that she has been in these same percentiles since she was born!) Grace on the other hand was two pounds chunkier and an inch shorter. Little ball of squish she was. Another difference is definitely the hair. Grace had full on curly pigtails at this age. Char is still working up to that, because she got Mommy's stick straight hair. 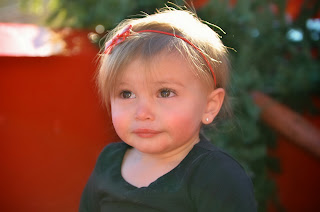 Charley has learned so many new words and talks to everyone she meets. She loves to hold conversations with people, and gets excited when she knows words. If I put on her jammies with cupcakes, she'll point to each one and say "cuh-keek" over and over.
She also loves to point to your eyes, nose, mouth, ears, head, and chin. She'll go around the room pointing out everyone's faces, and then show us on her baby doll.
Char is already a great little mommy. Her baby doll (along with doll stroller, pack and play, and high chair) is her most favorite thing to play with. She is always feeding her baby or swaddling her to put her to sleep.
She is also in love with Elmo. Whenever we see anything with Sesame Street on it at a store, she squeals "EHMOOOO!"
She loves to play games on the iPad and watch movies with her sister who she calls Cee Cee. Easton started this, and I guess it's easier for Char to say than Gracie, so she took it over. Every night before bed and every morning when she wakes up, Char is asking for Cee Cee (which also sounds a lot like sissy, so she totally could be saying that instead). 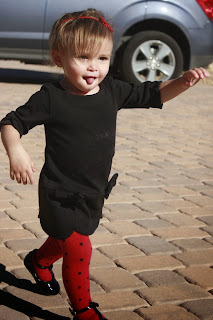 Little bug also says "please" and "thank you" all the time. She asks for juice, tells us when she is cold, says "fuffa" when she wants her socks off, and gets very upset if you try to take her food away from her before she eats every last bite. Even if she walks away, she'll be sure to come back and finish. Girl is a great eater, though I have no idea where the calories go.
She is still a cuddle bug and loves to snuggle with mom, dad, or sister.
She'd watch The Croods or Brave over and over and over. She also likes Monsters University and The Lorax, but they're not her first choice.
She chugs at least half of a water bottle before falling asleep every night, and always asks for it by saying "wa wa".
She loves to count her toes and says something that sounds like "why, why, why, why, WHY!" instead of "one, two, three, four FIVE!".
She has fully transitioned into the two-year-old class at school, and her teachers are always telling me how smart she is. Everyone at the school just loves her. I always pick her up first, and when we go get Gracie, all of the kids say "hi" to her and love to hold her hand. My little Charley bug is growing up, and she is the sweetest little stinker.
We love you Charley Anne :)
Charley Milestones