By Courtney Espejo - December 18, 2012
Grace face is officially two and a half! 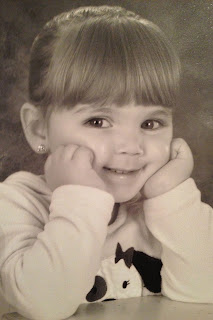 This little girl is growing up with the biggest personality.

She definitely keeps us on our toes and keeps us laughing ALL the time.

She says the funniest things, and I often find myself looking over to Isaac to see if he caught it, too.

She won't go to bed unless Mommy is there to tickle her arm or back. The other night she told me she had to roll her "weebs" up, so I could tickle her arm better. If she's wearing a onesie, she'll fight me until I let her unzip it "just a wittle bit, mom, so you can tickow back." How can I say no to that?!

Gracie also loves to snack. She is the slowest eater ever, and since we go out to dinner so often, we end up waiting for her to finish. She never does and will request a pouch or two as soon as we get into bed. Luckily, we ventured away from the Elmo pouches, and she's now eating stuff called "blueberry, pear, purple carrot" or "carrots, apples, and parsnips". They use only organic fruits and veggies, so I let her eat them at her request.

Her other favorite foods are chicken fingers, macaroni and cheese, peanut butter and jellies, and chicken pot pies.

She's weighing in at 32 pounds and is 35 and a half inches tall.

She now officially wears size 3T in shirts as she can't fit into many of her 2T clothes. The sleeves are too short to cover her little arms. She can still fit into her 2T pants, though, because girl is a shorty (near the fiftieth percentile). I've still been buying them in 3T sizes so they'll last a whole year.

She wears size 7 in shoes and probably has more than most two year olds. She loves to shop. We took her into Janie and Jack the other day, and they had a basket of shoes on the ground. Grace made Isaac come look, excitedly telling him, "Oh my gosh! Look at all of these cute little booties they have."

She is still a movie lover, too. We're currently watching a lot of Tinkerbell. Grammy has her all into fairies at the moment. She also loves Finding Nemo (which she just calls "Emo").

Baby girl still loves blue, and wants everything to be her favorite color.
Can Santa use blue wrapping paper? I want blue shoes! Can you make blue frosting?

Her hair is super long...almost to her tush: 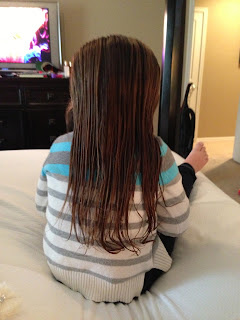 That also happens to be her most recent nickname. I call Grace "tush" and Charley "little tush". Poor kids...I just can't get enough of their squishy little tushies!

Grace loves going to school. They moved her into the early preschool room part time, because she's so smart! One day she came home counting to ten in Spanish. This girl totally amazes me.

We're still going to swim lessons, and she is doing great. I'm hoping in another couple of months she'll be a pro, and we can start gymnastics instead.

She is still a big help with Charley. When baby sister cries, Grace tells her it's ok. When she's sleeping, Grace likes to rub her little head and hold her hand. When she has her binky in, Grace takes it because "she wants to talk, Mom". She even tries to share her dinner with her when we're out to eat. I have to keep reminding her that Charley isn't ready for big girl food yet. Grace's response, "Oh she's yittow tiny, huh, Mom?"

Don't get me wrong. They do have typical sister moments. Just the other day, Grace was playing her drums as Charley sat nearby watching. Grace got up, shoved Charley down, and went right back to her drums. That one earned her a time-out. She isn't shy about telling on herself either. She'll come in the room and say, "I pushed Chawdey on her head".

Grace absolutely loves music, and yells at Isaac or I if we turn it down in the car. There is always some song running through her head. For example, yesterday she asked for a juice box, and when I handed it to her, she turned and ran towards the other room belting out "in a one horse open sleigh".

When she's thirsty so tells us, "I'm sooo drinky!"

When I tell her she can't have something she says, "Just only one, and that's it."

When I tell her to wait for something, she says, "just a minute and then we can have it?!"

This little girl just melts my heart. I can't imagine a day without her in it, and it terrifies me to think of her getting big and starting school in a couple of years. I wish I could just keep her small forever.

Mommy and Daddy love you more than you'll ever know. You're our little sunshine and you make us smile no matter what is going on in our busy little life.