By Courtney Espejo - September 26, 2019
I'm not quite sure how it happened, but Brother is already five months old.

He loves to smile and squeal and babble and chew on his toes. 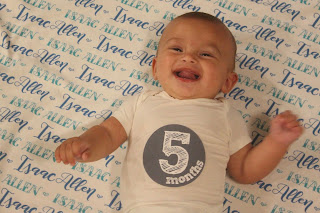 I say it every month, but he really is the happiest little guy. He gives everybody the biggest grin whenever he makes eye contact, and it melts everyone to pieces. He's always smiling at Mom, Dad, and Sisters and then turning away and burying his head in his blanket. I read somewhere that babies do this because they are so overcome with emotion that they just can't take it and have to look away. It's the sweetest thing ever, and he's smothered in kisses after every grin.

At five months old, Baby Isaac (yes, we've finally started calling him that on occasion) is going by Bro Bro for the most part. He's sometimes called Brother, Brother Bear, Bubba, Boog, Boo Boo - all the 'B' names. 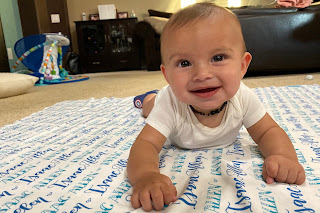 He is currently weighing in at sixteen pounds, which puts him in the race for the biggest baby. Grace still takes the cake with eighteen pounds at this age, but he's passed Charley at fifteen pounds and Perry at just over fourteen pounds. He didn't have a doctor's appointment this month, so no official height measurement until six months. Brother is still in 3-6 month clothes and some 6-12 month stuff if it's pants that are going over his big ol' belly or a smaller fitting shirt. We also recently moved to size three diapers.

He is rolling both ways pretty easily now, but going to his tummy is his go to. He rolls over and stays there and then will yell when he can't remember that he knows how to get back over. He is loving different toys lately, and anything that doubles as a teether is his fav. We can see his two bottom teeth through his gums, but they haven't quite made their way through them yet. He is drooling like a crazy person and has his fingers permanently placed in his mouth. 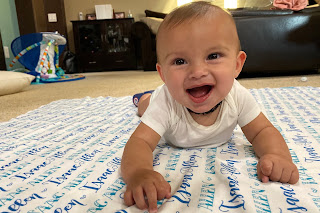 Brother still isn't giving us the big belly laughs that we're waiting for, but we're getting short little laughs here and there. It's mainly just giant smiles that look like he's going to laugh super hard and then no sound follows.

Baby is still eating every hour and a halfish with a decent stretch of sleep after his seven o'clock bath. That's an average including his stretches of sleep, so he's closer to every hour during the day. Isaac will always say, "Here, I think he's hungry." I'm always replying, "There's no way. I just fed him. {checks feeding app on phone} I guess he is. It's been one hour and six seconds since he ate." This is every day of our life. I don't know how the girls all ate every three hours, and this monster wants to eat constantly, but he does. Luckily, he only eats for about four minutes each time, so it's not like it takes a lot of time. It's just very frequent. We're getting ready to starts foods soon in hopes that it helps him stay full longer. 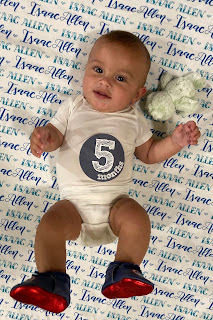 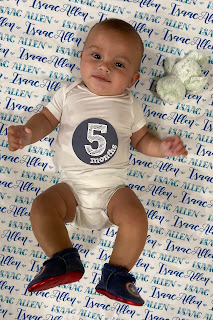 He is starting to have a bit of stranger danger and will cry if someone holds him that he doesn't recognize. It doesn't happen every time, but it's definitely getting more frequent. Especially if Mommy isn't in eyesight.

He likes to blow raspberries and babble back and forth which us, and the girls love it. Perry always makes up things that he is definitely saying to us like "he wants a bath" or "he likes me!". It cracks us up every time.

While the girls are all Daddy's Girls, Brother is a Momma's Boy through and through. He prefers me over anyone else, and I love it. I joke that we finally had one for me.

Brother had a chordee repair along with his circumcision this month, and he did great. He had to be put under, so it was a little stressful for Mom and Dad, especially waiting in the hospital room before the procedure. Afterwards, he was groggy and sleepy, but we kept him on a steady dose of Tylenol for about thirty-six hours, and then he was good to go. It was much easier than what I was expecting.

He's growing quickly, and we're trying to savor every moment. 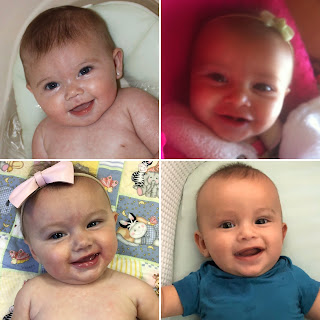