My Baby is THREE 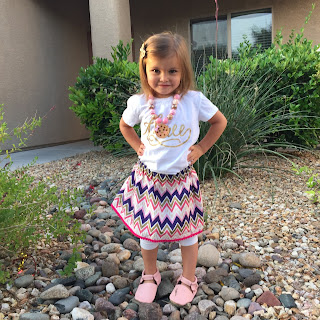 My wittle baby Chawley Bug is THREE. It's almost impossible for me to believe. I don't know if it's because she's the teeniest little human child, or if it's just because she's the youngest, but this girl will always be my snuggly, cuddly, sweet, little baby,

Just like we did with Grace, we filmed Charley answering twenty questions about her favorite things. I will continue to do this every year on her birthday, to see how she grows and changes throughout her childhood. I can't even imagine the things this feisty little sassy pants will come up with as her personality continues to grow.


It doesn't seem like we've been melting in her giggles for three whole years, and at the same time, it's difficult to remember what our family was like before she joined it. That feels like another lifetime.

She is so funny, loves to make people laugh, and has the silliest personality. There is no serious side to this kid, which is uplifting even on the hardest of days. (As you can see by the video above, it's also a little frustrating at times.)

Char is currently 36 inches tall and 31.8 pounds (that's half an inch shorter and 3.2 pounds less than her big sister was). She is all up-to-date on her shots and didn't even have to get any at her wellness check-up, which was an awesome surprise.

Charley is wearing size 3T in everything, although the pants are a little baggy and the shirts a little long. She's such a petite little thing. She's wearing an 8 in shoes, finally, and her favorite things in the world are her pink "Ooh Ahh Ahh Blanky" (it has a monkey on it) and every single Tsum Tsum the Disney Store has ever made. They are literally taking over their bedroom, and Charley insists on taking different ones everywhere she goes.

She loves to jump on her new trampoline and refuses to do anything without Grace by her side. She still loves movies, and her current favorites are Big Hero 6, Ghostbusters, and Lilo & Stitch. Stitch is totally up her ally, since they basically have the same personality. She even got a big stuffed one that she loves to sleep with every night.

Charley loves Noah, Easton, and JJ just as much as Gracie did. They are her best friends, and she asks to play with them all the time. She also loves Scarlett and Hudson and her cousins, Presley and Chase. They always have fun together no matter what they are doing.

Charley can trace all of her letters, and knows what her name looks like. Whenever she sees something that starts with a 'C', she'll tell me, "that's like my name, Chawley!". She can count to thirty in English and Spanish and knows her shapes and colors in both languages, as well. She's a smart little cookie when she wants to be.

Char is doing well in dance class, although she doesn't always want to follow the teacher. Her recital is in a month, and we are so excited to see her perform. She loves to go and always says she's going to be the best dancer in there. By the time it starts at 5pm on a Friday, she will sometimes do perfectly and sometimes not participate at all. Char definitely marches to the beat of her own drum. After the recital, dance class takes a summer break, so she'll be switching to gymnastics for a few months. We're thinking of sticking with it and just picking dance back up with it in the fall, but we'll see how it goes.

I haven't been doing so great with writing down all of the funny things the girls say lately, because, well, pretty much everything they say cracks me up, If I had to describe our family in one word, it would easily be laughter, because we are all always laughing with (and at) one another. Here are some of the things that have come out of Charley's mouth over the past year that I managed to get down on paper, starting with the oldest:

Noticing something in Daddy's shorts - "You poopoo'd the pants, Daddy?"

Instead of "I want to sit on your lap", Char would say, "I sippa yap!"

Isaac chewing on a bottle cap - "Daddy, get that outta yo mowf! Dats yucky!"

Mommy: "Go, Rebels!"
Char: "Webbos! Webbos! Yike that? Where's da mustache and the hat? I yike him. I wanna pitcher with him."

Mommy: "What did you have for lunch today at school, Char?"
Char: "I had waddywoldy (raviolis), but not quesadillas. I had peaches, but not bananas. {Points to Grace} You have waddywoldy on your shirt, Gwacie!"

Charley sits on the potty, and a big fart comes out. She laughs hysterically and says, "My butt is talking. It said, "Hi, pee!""

I took a bite out of her daily croissant before handing it to her. She takes it, looks in the bag, and says, "God Damn it, Mommy!"

Mommy: "What should we get at the grocery store? What kind of fruit do you guys want this week?"
Grace: "I like those black things with the orange-y inside. They're yummy!"
Mommy: "You want some plums?"
Grace: "Yeah, plums!"
A minute or two later, when we're on another topic, Char says, "What plums?"
She's always in her own little world and then just jumps back in out of nowhere.

Mommy: "What'd you guys do at school today?"
Charley: "Umm, I hit Brixton in the head with a vaccuum."

She pulled four baby pinecones from her pocket at dinner and says, "I brought these baby pine cones home for Mama, Daddy, Gracie, and Charley. {Gasp} I forgot one for Toodles!"

The girls got into an argument in the car. It went like this:
Char: "Remember last time when we ate popcorn with Presley?"
Grace: "We didn't have popcorn last night."
Char: "Not popcorn! What's that name again? That food name? On the stick?"
Mommy: "You mean cake pops?"
Charley: "Yeah! Cake pops. Remember when we ate cake pops with Presley?"
Grace: "Presley was not there."
Char: "Stop! I am not talking to you any more."

Char: "Maddux took my Pokio Zoom Zoom (Pinnochio Tsum Tsum)."
Mommy: "Why did he do that?"
Char: "Because Maddux is mean to my cubby!"

Watching the Billboards with Mommy. Nick Jonas comes on to sing Jealous, which is her favorite song.
Char: "He has pink arms?" (There were pink lights shining on him.)
A minute later, "His hair is weird. And why does he keep touching his belly? Does his tummy hurt?"
A minute later: "He's a black hair cute boy!"

Meghan Trainor starts singing and fog covers the ground. "Where is her shoes?"

This girl is just too much. She is such a diva and always wants things her way. I always joke that even if things around her are a mess, as long as they are in the same position or facing the same way, she's ok with it. She is so particular about everything. At school, two cubbies are on top of one another, and they share a space with two coat hooks. Charley refuses to share hers, because that's supposed to be for HER stuff. She won't put keep her blanket on unless the top is facing up. She wants all the crayons the same way in the bin. It may be wrong, but as long as it's her way, all is right in her little world.

Charley is the sweetest, silliest goofball around. She doesn't think she's allowed to leave the house without a bow in her hair and always makes me take a silly picture before she'll take a nice one. She keeps everyone in her world laughing, and we wouldn't have her any other way.

We love you so much, baby girl! Stop growing so fast!!
Birthdays Charley Milestones