By Espejos - March 21, 2010
...we watched the Rebels lose to the Panthers, only to watch UNI beat Kansas in their next game! It was sad but exciting all at the same time. We will definitely be rooting for them over Michigan State on Friday. This guy, Ali Farokhmanesh, is pretty amazing. He made two crazy three pointers to secure the wins over both UNLV and Kansas. It's weird how you can go from really disliking someone one day (because they ruined the Rebels' season) to loving them the next (because they beat the #1 seed in the tournament, which makes UNLV look at least a little better)! 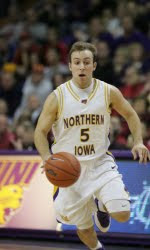 ...my sno-cone machine came! It was a day late, but Grace and I have been enjoyring sno-cones all week :) 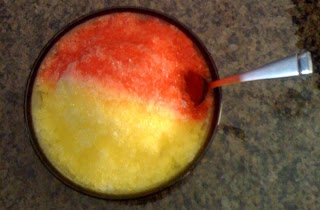 ...we ate at Memphis BBQ for St. Patty's Day.
...we enjoyed the first day of spring with a barbecue at my mom's house. My sister, Andrea, came in town from Ohio so we also enjoyed spending time with her. We had steak, corn on the cob, pasta, salad, and shrimp that they brought back from their Mexico trip. It was delicious!
...Isaac and I went to our prepared childbirth class. It was verrry interesting. We both learned so much about childbirth as well as all the medicines and drugs involved. I decided that I'm going to try and avoid the Stadol and Demerol since they both affect the baby, but I'm pretty sure I'll be getting an epidural. The nurse said that it has no affect on the baby at all so I'm all for it!
...we are 28 weeks pregnant! Grace has color to her now open eyes although it's probably not the color they will eventually be. Typically, baby's eyes won't settle on a color for 9 months after she is born! Also this week, we start kick counts. Every night after dinner I have to lay down on my left side. I record the first time baby kicks and then the time when she moves for the tenth time. This should always be less than an hour. If it's longer, then my doctor says I'm supposed to go straight to labor and delivery at the hospital!! Grace is about as long as a churro (15 inches) and weighs anywhere from two to three pounds. My wedding ring is starting to get pretty tight, so I'll probably have to stop wearing it in the next week or two.
12 more weeks!!
Pregnancy Sports Weekly Update