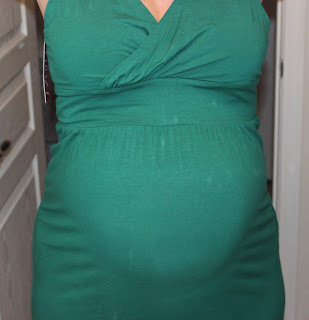 ...we are 29 weeks prego! Grace should weigh around 2.5 pounds, and from here on out I should be gaining weight like crazy...oy.
...we had a doctor's appointment and found out that my glucose levels are normal (thank God...no gestational diabetes for me), but my iron levels were a little low. I started iron supplements so hopefully that takes care of it. I've been dealing with Restless Leg Syndrome (RLS) since wayyy before I was pregnant, but it wasn't ever that bad. For those of you who have never heard of this, it's a new thing that just started getting diagnosed around 2003. It's not painful at all, but when you sit still for a long time (like during a movie) your legs get this weird feeling in them. It's like if you don't move them, they'll start to cramp up or something so you just move them and then it goes away for a minute or two. Then the feeling comes back. I usually just sit on the ground and stretch my legs out and then it will go away. It gets worse at night and some women have trouble sleeping. I've never had it wake me up, but I've felt it a few times before I fell asleep. The past few weeks it's been getting worse so I decided to start reading about it online. Apparently, one of the causes is thought to be low iron levels. I can happily say that since starting the supplements on Monday, my RLS is pretty much completely gone!!
...my sister Andrea was in town, so we ate out A LOT (like seriously, every night this week). We spent lots of time with the family and had a lot of fun. It was nice for us all to be together again!
...we were scheduled for our Infant CPR class again and we rescheduled...again.  Now it's on April 17th which is a Saturday so hopefully it'll be easier for us to make it!
Pregnancy Weekly Update