The Sweetest Baby {One Month}

By Courtney Espejo - June 05, 2016
It is so hard for me to believe that my littlest nugget is already one.month.old. 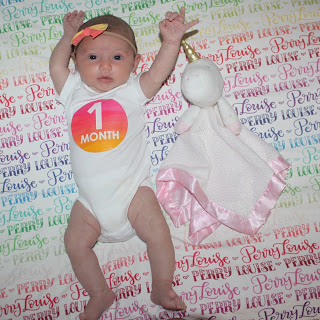 Like, where did that month go? Wasn't it just yesterday that we were counting down the weeks for her to get here? Weren't we just holding her in the hospital for the first time? Wasn't I just spending my first week with three kids at home enjoying having them all to myself?

It goes by so fast. I believe the time slips away quicker with each child. You're just doing so much and giving so much that you look up and a month has already flown by. 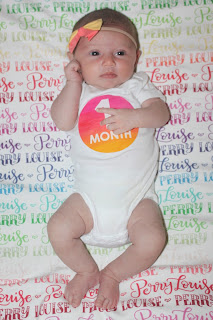 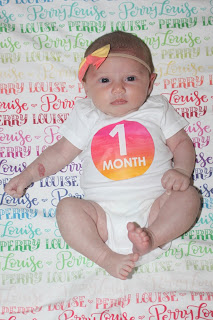 Perry is the sweetest baby of all time. She really is. She rarely cries, and when she does, it's because she has a dirty diaper or is hungry. She usually lets us know that she needs something with grunts and whimpers (like a little puppy) before crying. I was convinced that my first two kids were so easy, that I was bound to have one with colic or that was just super fussy. Thankfully, that isn't the case, and Perry is pretty much the opposite of a fussy baby.

At one month, the little babe is weighing in at eight pounds, fifteen ounces. That's a whole pound more than her birth weight, and since two weeks ago she was almost back to that birth weight, she's gained a whole pound in two weeks! That puts her in the fiftieth percentile for weight. She's twenty-one and a quarter inches long, which is in the seventy-fifth percentile. She got her first shot and only cried for a few seconds until mama's milk saved the day.

We had about two weeks where Perry spit up/threw up an entire feeding about once a day. I was really worried about it until I saw that her cheeks were filling out and nice little thigh rolls were forming. I am happy to say that it has been an entire week with no spit up at all, so I'm keeping my fingers crossed that we're past that stage. (It made for a lot of extra laundry!) 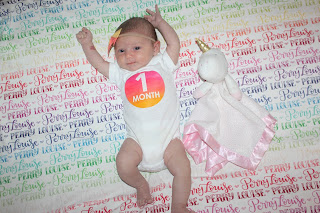 Perry is currently nursing for about five minutes every three hours. We get some random four, five, and even a six hour stretch, but then she makes up for it with more frequent feedings. Thankfully, the long ones usually come at night. She's had a couple of bottles of breast milk, and she's taken them easily. From what I can tell, she's eating about two ounces at each feeding. She's also blowing out diapers on the regular, which made us bump her up to size ones already. Especially since she's still uncertain of the bath. She enjoys laying on the bath sponge with warm wash cloths on her belly, but she hates to be washed up. 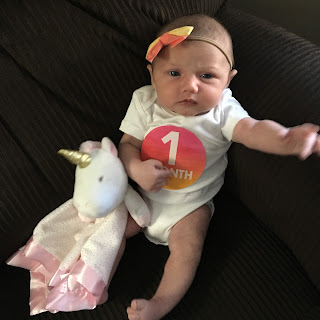 (This is her mad/I'm starving face.)

She's still fitting into her newborn clothes, but just barely. We're mostly in size 0-3 months already. Her little head doesn't keep headbands on very well, since they all seem to be too big for her. Luckily, we've got a few pairs of moccasins that fit her, so she can accessorize.

I've been trying to pump whenever we are going out somewhere, because I get way more than she's eating. This means we can take a two ounce bottle along, and I can freeze a bag of milk. I'm only up to ten frozen three ounce bags, but my goal is to have at least twenty-five when she starts going to day care. 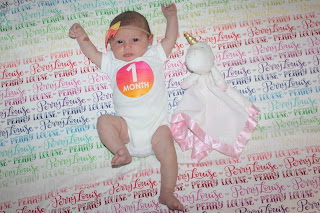 Perr Bear has the prettiest, biggest, blue eyes that she shows off when you talk to her. She likes to look out the windows and smiles sweetly in her sleep. Her favorite place to sleep is on Mommy's chest, but she'll also pass out in her rock 'n play (when it's rocking), the swing, and at night, she sleeps in our bed, on top of the Boppy with a blanket secured over it. She loves to sleep in the wrap carrier and swaddling her is hit or miss. Some days she'll pass right out, and other days she'll grunt and fight to free her little arms. She loves to have one little fist under her chin or both arms up above her head. 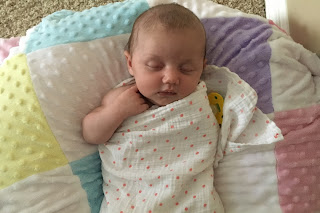 She's been coming to work with me and sleeps for most of the day in her rock 'n play sleeper. She basically just eats, sleeps, and poops. She saves her cutest faces and coos for when we are at home. Her strength amazes us as she already holds her head up pretty well and can roll onto either side. We get into little fights about the binky, but Mommy always wins, and she ends up taking it. Grace, on the other hand, is a pro at getting her to take it and always helps out if she gets fussy in the car. Perry is a fan of her car seat and almost always falls asleep right away when we put her in it. She gets a little grumpy when we stop, but she likes it, for the most part.

Her sisters are crazy about her and love to help with anything and everything. They want to hold her, change diapers, wash bottles, dress her, and kiss her constantly. Charley always calls her "boo boo", and it's the cutest thing you've ever witnessed. I made this comparison photo of the three of them as babies. She looks so much like both of them. 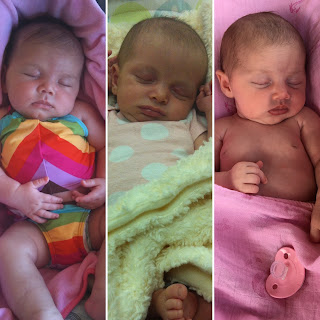 We love this little girl so much it's incredible. It will always amaze me how your heart can expand with a million times more love when you add another child. We always find ourselves stealing kisses, and I don't think I'll ever get enough!