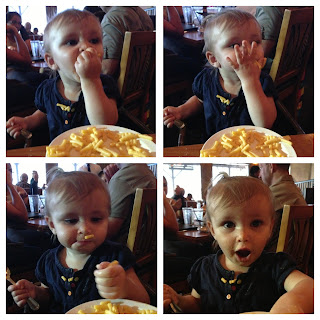 We couldn't love this little cupcake more. She is constantly getting smothered in kisses by Daddy and Mommy. Her little personality really came out this past month. She has an attitude and isn't afraid to use it. She's so funny, but very calculated. I have a feeling Grace will be the class clown while Char brings home the straight A report cards. It's so fun watching them grow and learn together. We are so, so blessed with these little munchkins.
This month:
Chawee weighs twenty-three pounds, nine ounces (50th percentile).
She is thirty-one and three quarter inches tall (80th percentile).
Her favorite things are her blankies, her stuffed lion named Roar, and jewelry.
Girl can put away some food. She consistently eats more than her big sister at each and every meal.
She's getting really good at telling you what she wants. Usually, it's a popsicle, and she'll go to the freezer and pull on the door until someone gets her one.
Movies we watched over and over this month include: Cloudy with a Chance of Meatballs, Epic, and Beauty and the Beast.
Charley loves building forts with sister, and is even more excited when she gets to hide out inside of them with her light up teddy bear.
She is obsessed with stickers and will sit very still while Grace covers her in them. She also lets Grace color her entire body with markers.
She understands everything you say and follows directions well. Her doctor was very impressed with her ability to comprehend everything.
Char learned more new words this month, but the most important one was the word "yes". It sounds more like "yeshhh", and it's adorable. (Char, do you want dinner? "yeshhh!")
Much like her sister, she'd rather waddle around in a diaper than wear clothes.
She's still at sixteen teeth, but I'm pretty sure her two-year-old molars are making their way through. Charley is always chewing on her little fingers lately.
Still wearing 12-18 months clothes and size six shoes.
We are currently starting operation: wean Charley from nursing. She's not going to be happy about it, but my goal is to be completely done by the end of the month. That way she'll have one more month with the binky before she gets that taken away, too. I have a feeling that one will be much easier.
Wish us luck! ﻿
Charley Milestones