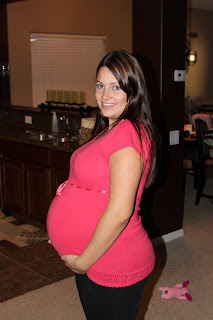 ...we are in our 37th week of pregnancy!! I told Isaac this morning that it feels like you are getting THE BEST Christmas present ever and you already know about it, but Christmas is still a month away and your mom won't let you have it early! It's terrible. Next week we get to start having weekly exams to find out where we are at and when little Grace should be arriving. I'm hoping for a banana! 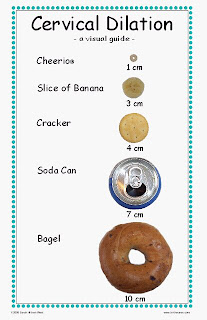 ...I finished Grace's blankie. I have had the same one since I was born and still sleep with it every night. I'm hoping that this becomes her blankie of choice.  It started out like this... 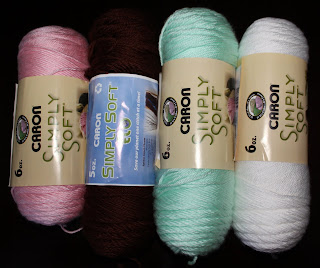 and ended up like this (I nixed the green when I realized it was starting to look like spumoni):

I'm pretty happy with! It matches her room perfectly and is really girly. Mine is brown with puppies all over it, so I'm glad she'll have a girly one to take along with her where ever she goes!
...we finally got Grace's stroller and carseat!! I'm in love with this stroller because you can open and close it one-handed. It's super easy to do with a kid in the other arm. Isaac and I took forever to decide on this one, mainly because they didn't have it at Babies R Us where we registered. We picked out one there that we liked but then decided it was too boyish for our little Gracie. We chose another set and it was discontinued a few weeks later. Finally we saw this one on-line and knew it was perfect. I love the colors so we also got the Pack 'n Play and the Highchair (which happen to match our house perfectly as well). 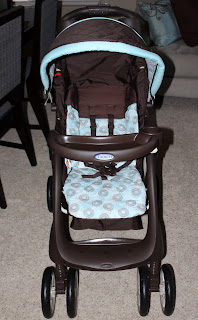 ...Grace is probably somewhere around six and a half pounds. She was three and a half on April 3 and should be gaining about half a pound a week. I can definitely feel it. Everytime I stand up, my feet hurt so bad I can hardly walk and my lower back is achy all the time. Other than that I feel pretty good though. I'm still working full time and getting things ready around the house. I am pretty sure she has dropped as well, because I pee at least 25 times a day now!
...baby is only one week away from being considered FULL TERM!! Whoo hooo :) (Although the ultrasound measured her being one week ahead of schedule so it's possible that she is full term NOW!)
...her gums are firm and ridges are in place for her teeth to arrive in about 3 months or so.  She also has definite sleep patterns. I always eat breakfast around 7, lunch about 11, and dinner around 5. She is good about waking up just before I eat to let me know that it's time and staying active for at least half an hour after I eat. You can clearly see my belly moving all around when she's awake and squirming.
26 more days :)
Pregnancy Weekly Update