By Espejos - May 23, 2010
...I had a doctor's appointment with my first exam since the beginning of the pregnancy.  She said I was 1 cm dialated which made me sooo excited because that meant the actual beginning signs of Grace arriving were here! I didn't really understand that you could be 1 cm for over a month if the baby still wasn't ready. Excitement gone.
...I also had an ultrasound because Dr. Tyre wasn't one hundred percent sure that the baby was head down. During the ultrasound we discovered that she most definitely is, she weighs 7 pounds 1 ounce, and she has more hair than any baby EVER. We are good to go.
...Eddie and Kelli officially became husband and wife!! We had a great time at their beautiful wedding and couldn't be happier for them. 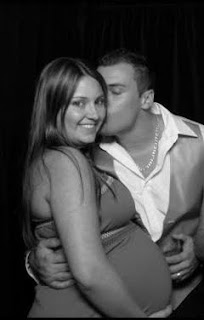 ...we picked out Grace's "coming home from the hospital" outfit. Isaac went upstairs to feed the fish one night and was up there for a looong time. I asked him what he was doing and he said, "I'm trying to pick out Grace's outfit for when we bring her home." It was so cute. Of course I went up to help him. First, we picked out this one because the hat is the cutest thing in the world: 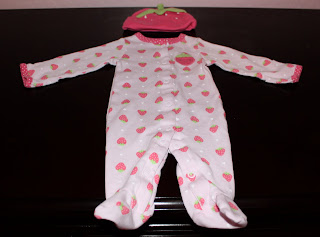 Then we realized that June is just around the corner, and it should be getting super hot any day now. So we went with something a little cooler so she'll be more comfortable: 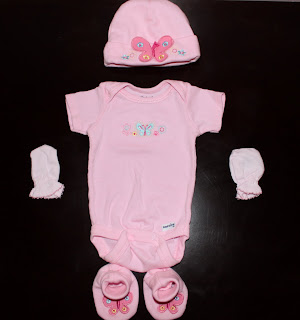 We're bringing both just in case, plus a few more teeny tiny onesies that are just adorable.
...I started having contractions!! On Sunday, we were going through the Memphis BBQ drive-thru (surprise, surprise) when I had this cramping in my stomach. It moved to my back and began tightening up. After a couple of minutes it went away only to come back twenty minutes later. This kept happening every twenty minutes for about four hours before it just stopped completely. We were so bummed! Maybe next week she'll be ready?!
Friends Pregnancy Weekly Update