By Espejos - February 27, 2010
After weeks and weeks of waiting for the baby bedding, it finally arrived and we were able to start on the nursery!!
The bedding came in on a Wednesday so the next day on our lunch break we went to Home Depot to check out some paint. We picked a color we really liked in Behr's Disney Collection. It was called "Shy Little Piglet" from the Pooh series. It matched the wall paper perfectly so we thought it would be a good idea to get two cans of it plus two cans of the same color with only 50% of the dye so it would be much lighter. Our idea was to put the wallpaper around the room right in the middle of the wall with the lighter color on top and the darker one on bottom.
When we got home, I (of course) wanted to paint right away. Isaac had other plans (like playing his Xbox or watching a movie).  So when Friday night came I was ready to go. He still came up with a reason not to paint.  Saturday morning I was up bright and early and eager to get started. Of course it had started raining!  Isaac decided that since we couldn't open the windows, I wasn't allowed to paint. He even called my mom because he thought she would agree with him. When she told him I would be fine as long as I had a painters mask, he went to Lowe's and grabbed me one. After we finally got the room all taped off and the paint ready to go, the rain stopped.  We were able to open the windows and enjoy the cool air while we painted (and I didn't even have to wear that stupid mask).  After two coats of paint and a few touch-ups, we were finally finished! 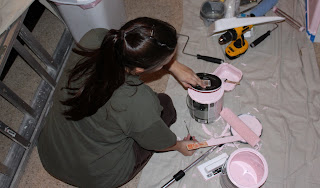 Opening up the second can of paint. 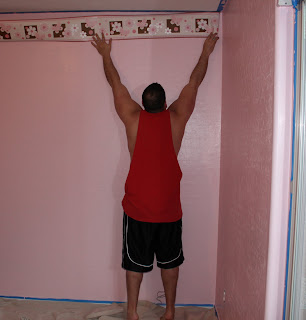 Debating on where to put the wallpaper.
We decided that we should paint the whole room one color first to see how we liked it before we added the darker color on the bottom half.  When we were finished, we really liked the way it looked, so we wanted to find out what we could do differently with the wallpaper.  After holding it at different levels, we decided on the top of the wall.  It turned out so adorable, and we definitely couldn't be any happier with the outcome! 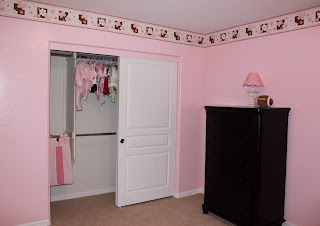 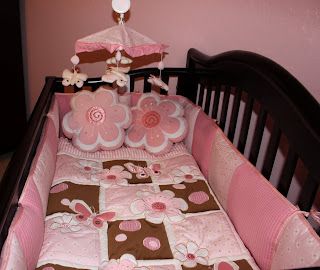 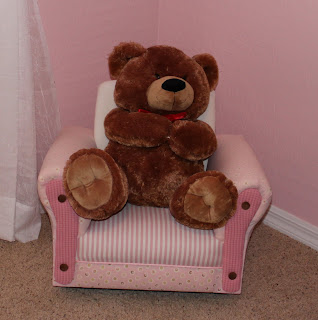 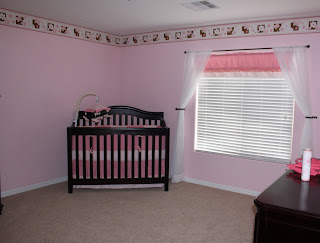 Crib and curtains.
All we have left to do is hang her name.  We are thinking about putting it down the wall on the left side of the closet.  I started out painting the letters a dark pink.  They matched really well and looked cute, but I felt like it was a little too much. 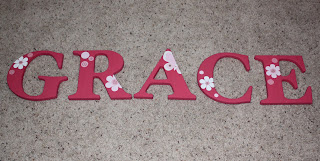 So I decided to buy more letters and paint them brown.  They turned out just as cute and they tone the pink down a little bit. 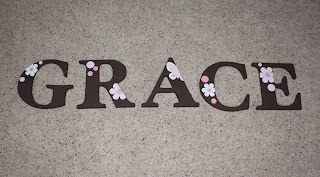 Now that the nursery is complete (for the most part), I realllly can't wait for Grace to get here!!
Nursery Pregnancy 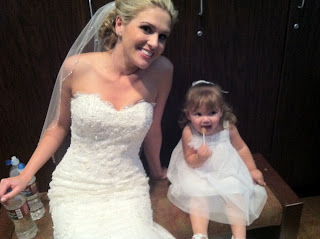 Kasie and Jeremy have become some of Isaac and my best friends over the last few years. We do a lot together and always have a great time with them. When they asked us to be in their wedding party, we couldn't have been more honored and excited that the two of them were finally tying the knot AND that they wanted us to be a part of their special day. This past week, the wedding day we've been waiting for forever finally arrived. Since I had a baby just eleven days before, I didn't get to stay at the hotel the night before with Kasie.  (I was totally bummed!)   Grace was the flower girl, so she, Charley, and I headed to the hotel a few hours before the wedding to get ready with the other girls. Once we were all ready to go, we were off to Bear's Best where Kasie finally got into her dress. I have to say that she was the most gorgeous bride I've ever seen! We took some pictures and waited in the locker room for what seemed like fo
Read more