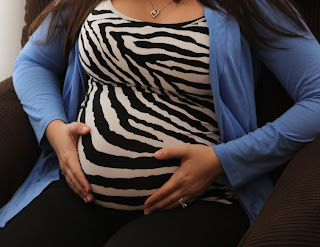 We are finally 24 weeks pregnant.  This is the point where the baby is no longer considered a miscarriage if she's born!! She'll be an actual premie and will have about a 50% chance of survival.  It will be an even bigger relief when we hit 28 weeks where she'll have an 80% chance of survival.
This week, Grace is perfecting her lungs and packing on the pounds.  She will gain about half a pound this week alone!  Since her inner ear is now fully formed, baby will be able to tell if she's hanging upside down or laying right side up.  Grace is now about the length of an ear of corn.  Due to this, she is no longer able to do somersaults because there just isn't enough room in there. 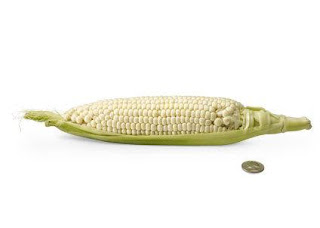 Also this week, the baby bedding is finally on its way!! It has been almost 7 weeks since I ordered it, and when I emailed the company on Monday, they didn't respond.  My mom had ordered a few things to go with it, and they emailed here Wednesday saying that they had cancelled her order.  We checked another website that had the same bedding and decided to order from there even though it was a bit more expensive.  It shipped the very next day and we should have it by Wednesday!  I'm hoping that I can get Isaac to start painting with me this weekend.
On Monday, I was sitting on the chair downstairs and Grace kicked so hard on my left side that my arm moved.  She did it again and I was so excited that I told Isaac to feel.  He didn't believe me until he felt her kick.  He looked at me with this huge grin and said, "What was that?"  Well duh, it was the baby...it's not like I could make my stomach do that!  We kept waiting and waiting but didn't get any other kicks out of her.  I've felt her more and more throughout the week, but Isaac hasn't been able to feel any more movements.
Ever since I got pregnant my mom has been telling me that I need to take nightly walks.  She says it will help with labor, delivery, and recovery after the baby is here.  I didn't listen and really didn't feel like walking around the neighborhood all by myself.  Now that Valentine's Day is over at the flower shop, she has been coming up to my house every day after work so we can take a walk.  Isabel is really enjoying it.  She likes to bark at every person she sees and tries to chase the little boys playing football in the street.  I really have been enjoying it as well.  I feel like I have tons more energy throughout the day.
Wednesday night, Isaac and I didn't sleep very well.  First, I woke up around 2 to use the restroom and could not fall back asleep.  I just wanted to take a bath so bad.  After I finally fell asleep, I was woken up at 3:30 to a pack of coyotes howling and yapping.  It sounded like they were right at the back door because they were soo loud.  Jojo came running up onto the bed so we could save him.  After that, I woke up about 4:30 because my right calf was cramping.  It was the worst pain I've ever felt, and only stopped when I was running around the room.  Isaac had to get up and stretch it out for me.  After that, we finally got a full 2 hours of sleep before we had to get up for work!
So that's what has been going on with us this week.
Only 16 more weeks until Gracie is here!!
Pregnancy