By Espejos - February 13, 2010
...we had our ultrasound with the fetal cardiologist. He was this little, old man with an accent (German, maybe?). He kept saying, "Mmm Hmm, this aorta looks very good.  Mmm Hmm, this bridge looks very good." He was soo cute! At the end he said that everything looked great and that she was right on schedule. The average weight at this stage is one pound and little Gracie is weighing in at one pound, one ounce. According to her measurements, she was 22 weeks and 3 days on Monday which is right where we thought we were. The doctor also told me to stop with the Tums and move up to Pepcid. He says there are about 4 steps we can take so if this one doesn't work we can always do more. As usual, Grace kept putting her hands up by her face and hiding from us. Only 7 more weeks until we go to our next 4d ultrasound and get to see exactly what she looks like!
...I got this adorable little outfit for Grace. It's definately my new favorite...go Sooners!! 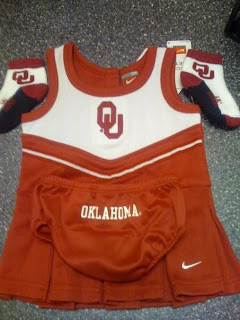 ...we are 23 weeks prego!! This week Grace is producing fat like crazy. She currently weighs as much as a large mango. The doctor said that she should weigh over two pounds (double her current weight) by week 26. 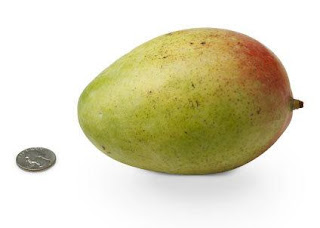