Her Goofy Giggle {Char is Seven!}

She had to do a project at school this week, and she described herself as fast, funny, pretty, silly, clumsy, and smart. I'd say she hit the nail on the head. Girlfriend knows herself so well. 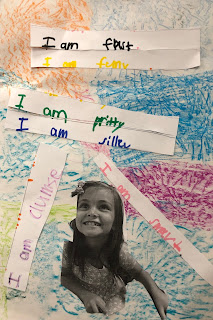 This girl loves to wear dresses and skirts, but she also loves to get down in street hockey or softball with the boys. She's definitely our biggest tomboy, and her sense of style is all her own. She'll wear a shirt with leggings and a skirt, and none of them will match. Somehow, she still pulls it off and looks adorable, though. 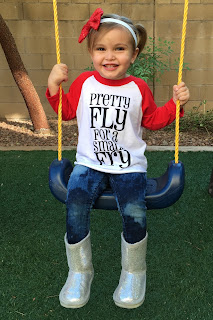 It's hard for me to believe that she isn't this crazy little girl anymore. She's still crazy, just bigger and louder.

Our annual tradition is to ask the girls twenty questions on their birthday each year to see how much they change. Charley had some funny responses this year. My favorite part is at the end when she isn't sure whether she's seven or eight. Isaac has been teasing her for weeks that we are skipping her seventh birthday and not letting her have a party, so she'll go straight from six to eight.


Char is always happy and maybe the silliest kid I know. She loves to laugh and giggle, and she's always got a good Knock Knock joke ready.

She's feisty and won't back down from a fight. She isn't afraid to stand her ground, especially if she believes she's right. Somehow, she always ends up getting out of chores by "going to the bathroom" or cleaning up her room until the chores are done. Poor Grace always ends up doing the dishes or cleaning their playroom by herself.

Charley still loves soccer and is super competitive. She's vert fast and is always near the ball because of this. Her team went to the championship at the end of this season and lost by one point in penalty kicks after tying with the other team in regulation. We thought she was going to be upset, but she said "we still get a medal, right?". The year before, the didn't get to the championship, so they didn't get a medal. She was so happy to finally get her own to hang in her room, even if it was second place!

Char loves to hang out with Grace - most of the time. They have their moments where they fight and try to kill each other, but for the most part, they hang out together playing with baby dolls, video games, or running the streets after school.

She loves the color mint and wants everything of hers to be that color. She likes unicorns, rainbows, and anything that sparkles. Her collection of LOL dolls is impressive, and she will never have enough stuffed animals.

Chaw-ley is the best big sister. Perry often calls her "my Char Char" and looks to her first for anything she needs. Charley is always willing to help her out and make her baby sis happy.

She is still clumsy and is always falling or running into things. She's been dubbed Oopsy Charley, and whenever she gets hurt or drops something, she'll say, "that's why they call me Oopsy Charley!". I'm not even sure who came up with this, but Grace likes to rub it in whenever she can.

Charley isn't a big eater and mostly sticks to macaroni and cheese, chicken nuggets, and eggs. We have to bribe her with dessert to eat pretty much anything else. She has the biggest sweet tooth and loves anything that's full of sugar, so we're constantly explaining to her why she should make better food choices and pay attention to what she is putting in her body.

She is super smart and got all A's on her report card this year except for a high B in reading. She's doing great with reading and writing and loves to learn. She likes to work in workbooks and teach herself new things. Her memory is photographic, and she can read through a sight word list one time and know them all the second time through. She's always impressing us by passing off lists when we didn't even go over them with her.

Char has always been the best sleeper and still likes to get a nap in when she can. She's also known to fall asleep wherever she's at around seven thirty at night. Char has slept on a raft in the pool, in the middle of a birthday party, and always on the couch when we're all hanging out.

We love this girl so stinking much! She reminds us all to be silly and always keeps us laughing. I hope she never loses her confidence or strength in her beliefs. She makes us so proud, and our family definitely would not be the same without her goofy giggle.