By Courtney Espejo - January 26, 2020
Bro Bro is nine months old! I can't even believe it. He's now been on the outside longer than he was on the inside.

He's still the happiest, most smiley baby around. Any time he makes eye contact with any of us, he just lights up, and he has a huge toothy grin now. Kid just got his eighth tooth! He's still drooling like a maniac, and everything he touches goes right in to his mouth.

He is wearing mostly twelve month sizes in clothing and is between size two and three in shoes. He's still in size four diapers and will be for a while. 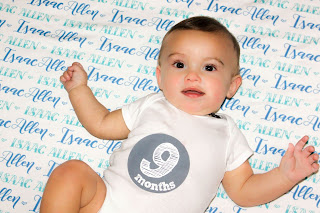 Brother has finally started eating pureed baby foods but only by the pouch. He doesn't want you to feed him with a spoon, because that's baby stuff. His favorite is Happy Baby's banana, sweet potato, and papaya. He also enjoys strawberry banana, which is Mama's favorite flavor of anything and everything. He's mostly just eating bites of what we're eating, which lately has included pizza, eggs, toast, shredded chicken, cookies, pork chops, potatoes, and bananas.

Bro Bro is moving all over the place. He crawls, pulls himself up to stand, and walks along the edge of whatever he is holding on to. I could barely get pictures of him this month, because the second I laid him on his back, he flipped over and crawled away. 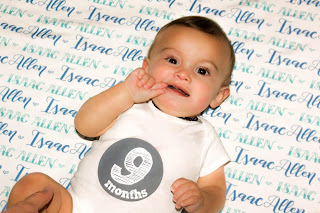 (Notice Daddy's hand trying to hold him down)

He's also trying to communicate with us more frequently. He loves to click his tongue and then gets so excited when you do it back. We'll go back and forth forever with him getting just as excited each time. He also yells "dadada", screeches, and says "maaam" when he's fussing. He's clapping and loves when we all say "yayyyy" while he's doing so. At his nine month wellness check-up, the doctor said he's on pace with a one-year-old already. Big boy!

He's super ticklish all over the place. We mostly get him on his back near his shoulders and on his belly, but his thighs and feet will also get giggles out of him. He's a total blanky baby and has to have one nearby at all times. He loved Copper Pearl swaddle blankets, so I bought a ton of them. Then I got one of their quilts, which is essentially three swaddle blankets together and almost like a weighted blanket. Now that's all he wants, so we don't even use the swaddle blankets. He rotates between a couple of these quilts and has them in the car, at school, and always next to him at home. 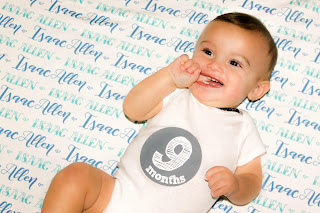 He mostly goes by Bro Bro now, with the occasional Brudder, Brud, Bo Bo, and Broski. We only call him by Isaac when we want him to look directly at us or stop climbing up the bar stools in the kitchen.

Bed time is getting a little better, and he mostly sleeps from six to six waking up every two hours or so to nurse. He had a couple of colds over the past two months, and when he's congested or his ears are bothering him, he sleeps better in his swing. We've started using the Zipadee Zip again, and he sleeps pretty good in that in his DockATot between us. 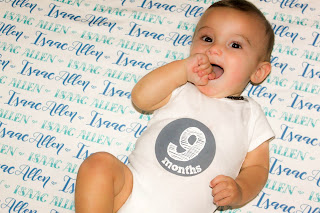 He's been in day care for about three months now, and he's finally taking a bottle. His teacher bought some cheap ones, and he actually liked them. Once he was taking them easily, I started using his Como Tomo ones again, and he decided he didn't want those. We're back to the cheap ones, and he's drinking 2-4 three ouncers a day and also eating two or three pouches. He takes a morning and afternoon nap at school, but his best naps are on the weekends. He will sleep for three hours in the morning if I rock him to sleep and then put him in the swing with his noise machine.

He loves his sisters, and they always get the biggest smiles out of him. Perry loves to roll around the floor with him, and she'll purposely try to wake him up from a nap so they can play. It drives me crazy, but it's also really sweet. 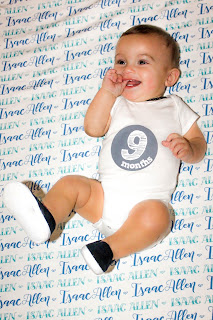 Mama is his favorite, but he really loves his Daddy, too. He will crawl behind Daddy and follow him all around the house. Whenever he comes in to eyesight, Brother will reach out for him. If I'm holding him, and we get close to a stranger, or someone he isn't super familiar with, he will squeeze the back of my arm and lay his head on my shoulder. It's my favorite! 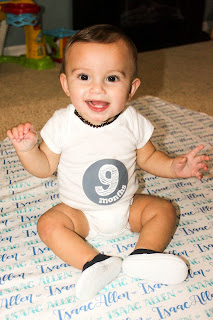 This boy is getting so big, and there is no holding him back anymore. He's on the move and doesn't want to be contained in a pack 'n play or jumper. It's so fun to watch him grow and learn every day. We all love him so much, so there is an endless supply of kisses and squishes around here.

(For the record, I missed his eight month blog, so we're jumping from seven months to nine months here.) 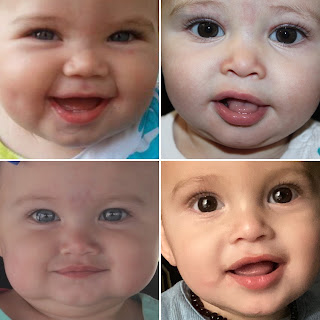