By Courtney Espejo - November 05, 2016
This weekend, we celebrated Perry's half birthday. I cannot believe this little stinker is already half way to being one-year-old. It can't be real. 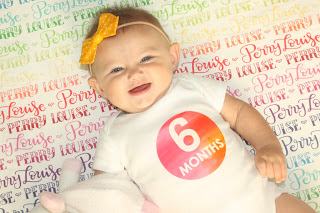 This baby is the sweetest little girl. She loves to smile. Just recently, she has started laying her head on my shoulder when she's tired or right after she smiles at anyone, because she's pretty shy. It melts my heart every time she hides her face in my arms. If she lays her head on my shoulder and falls asleep, forget any plans we had, because I'm sitting down to hold her while she sleeps. 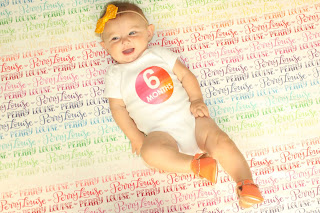 Although she looks like such a chunk, Perry is in the fortieth percentile for weight and the sixtieth for height. At six months old, she's weighing in at 15 pounds, 9 ounces and is twenty-six inches long. She's basically the same size as Char, which is four whole pounds lighter than Gracie was! 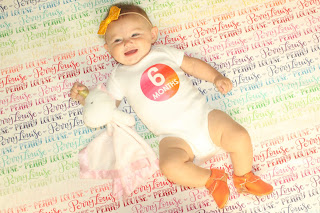 She is currently in size 6-12 month clothing and size one shoes. She can wear nine month stuff, but it's a little big. She has a lot of size two shoes that she wears, even though they're big, because they work and buying them bigger means they'll last well into next year. She's also still in size three diapers, and luckily the blowouts have slowed down a little lately. 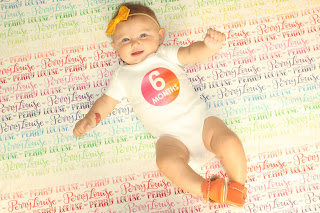 Little lady is quite a collector. She's already got a fancy collection of bows, FP moccs, and bamboo muslin blankies. These are a few of her favorite things. 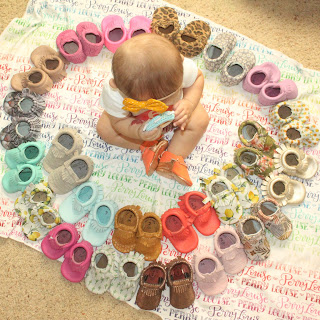 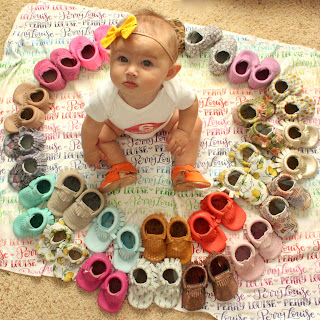 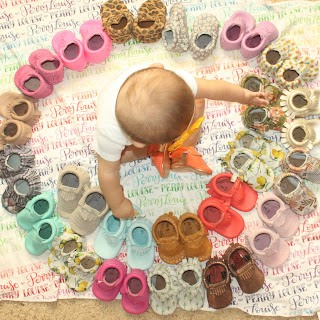 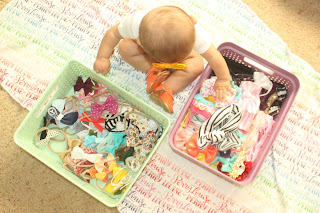 Perry isn't a big eater. She has tried pears, peaches, pumpkin, sweet potatoes, bananas, peas, and apples. She hasn't liked one of them. I think it's the pureed thing. She just spits it out as soon as you get the spoon in her mouth. She does love to eat bananas out of the mesh feeder. She gets so excited whenever she sees it. Baby also liked a pumpkin, apple, cinnamon mixture that we tried but was over it after a couple of bites. She will also only open her mouth if the food is warmed up for her first. 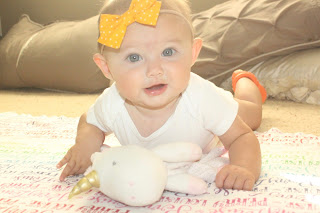 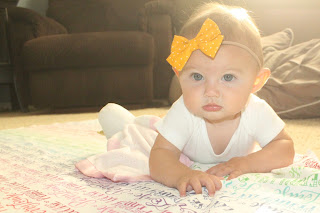 Perr Bear is currently eating about every three hours for about three minutes. She has no desire to comfort nurse, which is pretty nice. When she's done eating, she'll just lay there and stare up at me with the sweetest grin, which now includes her two bottom teeth! They just popped through this week, and she barely made a fuss about it at all aside from chomping away on her fingers. 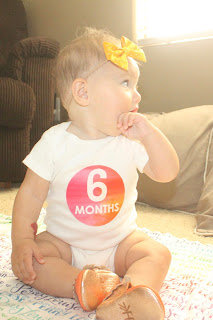 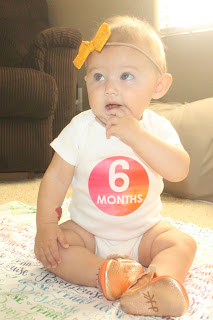 She has been rolling from back to tummy for a while, but this month she mastered sitting up and rolling from tummy to back. Now that she rolls back onto her tummy, she's been using her feet to propel herself forwards to go after toys. I can't believe she's big enough for this stuff! Daddy has her standing against the ottoman, while holding on to it with her little hands, too. She loves to look inside at her toys. She also likes to sit in the living room when everyone is around her and play with her toys. She watches Goldie and Bear and Floogals on TV, while we're cooking, cleaning, eating, etc. 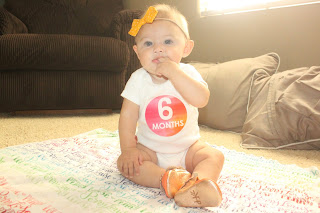 Perry has started to notice who is talking to her or holding her. She will look backwards to see who has her if she can't see your face. She's still a little wary of strangers and will cry if she doesn't recognize you.

Perr is still on her schedule of coming to work with Mommy in the mornings. She takes a decent morning nap and an afternoon nap with little twenty minute snoozes in between eating and playing on the floor with her toys. I brought the Bumbo, so she'll sit in that in between mine and Auntie's desks while she plays. She's really good with her hands and transfers toys back and forth with ease now. 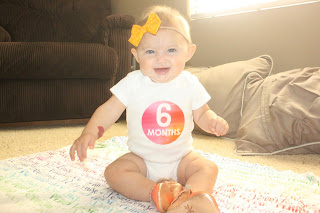 Once we head home, she sleeps in the car until we pick up Charley. Then we go to Shelly's to get Gracie, and she always gets her snuggle in. Perry usually takes a nap at this time in her bouncer, while Grace does homework. We have soccer practice most nights, where Perry hangs out and plays with everyone. She is usually mad on the way home, because it's past seven, which is her bath time. She loves her bath, because she knows that afterwards she gets lotioned up, swaddled, nursed, and then goes in her DockATot with her binky. She still loves this thing and puts herself to sleep in it every night. 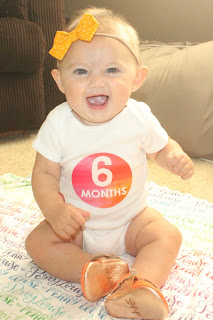 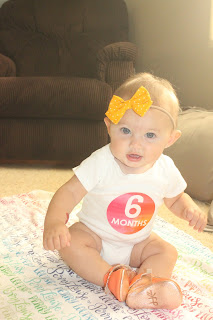 Her sisters are still Perry's favorite. They constantly get the biggest grins and giggles from her. Whenever we're in the car, she's always got her head turned looking at them to see what they are up to. She'll also move her lips like she's talking to them with little wispy sounds. It's so precious. 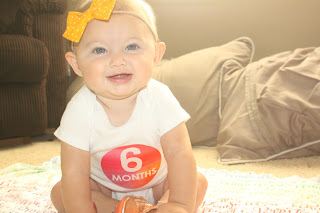 It's hard to imagine life without my little Perr Bear. Although, she has only been with us for six months, it feels like so much longer. The love that she shares with Grace and Charley kills me. It's so crazy to me that Isaac and I created more people than the two of us. We're outnumbered, and it's so amazing the way your heart quadruples with love for each of your children. Grace is so great at taking care of Perry and helping whenever she's needed. Seeing Charley in the big sister role is awesome. She loves Perry so much, and I'm constantly telling her to back up a little bit. She just wants to be in her face kissing her or hugging her all the time.

We are so blessed with these girls, and I wouldn't have it any other way.

Happy Half Birthday, Perry! We love your sweet self <3 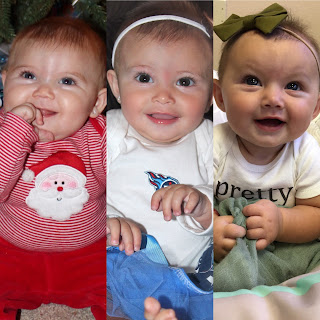