By Courtney Espejo - June 26, 2019
Baby Brother is two months old. The months are already flying by so fast that I can't keep up! 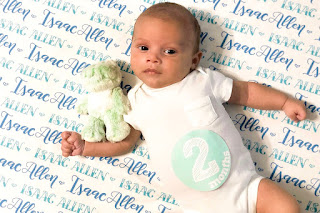 He still loves to sleep the day (and night!) away, but he's definitely awake more now. We all love talking to him and trying to get him to smile at us. So far, he's only smiled at Charley and Mommy, but Daddy got his first one this morning. It definitely takes some work, because he's not smiling all the time just yet.

This past week, he's really gotten control of his eyes and can focus them better. Daddy kept calling him crazy eyes, because his right eye wouldn't always focus with his left one. His cheeks have also grown this month and are pretty big now. He's got some rolls coming in on his arms and legs, too! 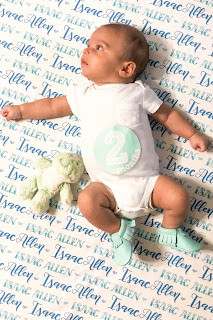 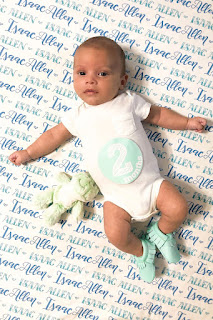 Baby doesn't have his two month check up until next week, so we took some measurements ourselves. He's currently at eleven pounds and six ounces. That's more than Perry and Charley were, but just by a hair. He's still a pound off of Grace's two month weight. He is twenty-three inches long, which is more than all of the girls were.

Brother is wearing size 0-3 months in everything now. This size fits perfectly, so I'm guessing we'll be starting to move up by next month. He's moved into size one diapers, and will be for a while, because we have a ton of them. 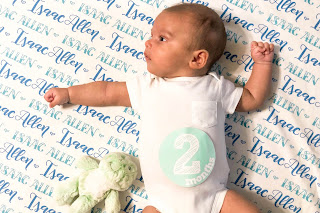 Since he's getting pretty good at holding his head up, brother can now sit in his sit-me-up. He seems to like it because he can sit up and see everything that's going on. He is also still loving to nap in his Moba basket and sleeps in his DockATot at night. I still try to swaddle him some nights, and he still fights to get his arms out. He seems to only like to be swaddled at nap time. We got some sleep bags from Kyte Baby that are super soft, and he really seems to like those for bed time.

Along with the Kyte Baby sleep bags, we also love their onesies. They are so soft! We're also big fans of the Copper Pearl swaddles, burp cloths, and nursing covers and have built up a good stash of boy blankets. Little Sleepies are our favorite pajamas, and baby Isaac likes Nuk binkies when he does decide to take one while falling asleep. 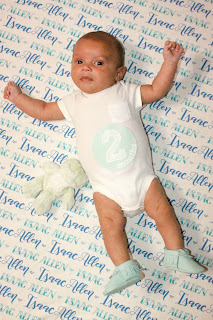 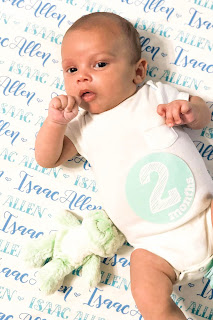 Speaking of sleep, we started a bedtime routine a couple of weeks ago to get him to sleep more. He gets a bath around 7:30 every night, and then I rock and nurse him for a bit. When he's done eating, I put him in his bed, and he falls asleep on his own. We're currently getting at least a four hour stretch after that before he wakes to nurse again. Then it's every two to three hours until morning. It's hard to tell when he's up for the day, because I get him up at 5:45 to feed him before we leave for work.

At work, he's been really good about napping most of the day. When he isn't asleep, he hangs out in his rock and play and looks around quietly. He really likes to look out the window. He typically sleeps when we get there for about an hour. Then he eats and goes back to sleep for a two to three hour nap. He basically follows this pattern all day until it's time to go pick the girls up and head home for. I log his feedings in an app called Baby Feed Timer. I used it with Perry, too, and I love it, because it tells you what side you nursed on last and times the length of each feeding. You can look at historical info and get averages, too. Throughout the day and night, baby's current average is to eat for six minutes every two hours and eight minutes, which is eleven times per day. 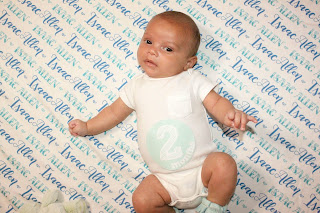 He is spitting up way less the past two weeks, and I'm so thankful for that. Now it's just little bits here and there versus a lot every single time he ate. I'm still using the Haakaa pump on the opposite side when he nurses, so I've got over twenty bags of milk stored in the freezer. It feels so good, because when Perry started day care, I only had two bags. I would have to pump two bags every day to make sure she had enough for tomorrow. I'm determined to make sure that doesn't happen this time around.

This month, baby has rolled over from his belly to his back a few times. He's trying to go from back to belly already and can get about half way there. He is still fighting me on the binky most of the time and does pretty good without it. I still make him take it when he's a little fussy, but he is such a chill baby that it's not too often. He's gotten better in the car and sleeps every time he's in his car seat now. 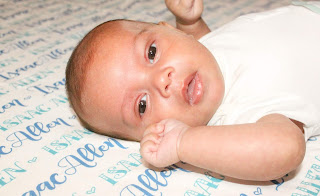 We are all still so in love with him. Perry wants to hold him constantly, and Grace and Char are always carrying him around and helping when he cries. He basically has four moms. This little guy has stolen our hearts, and it's rare that you'll find him by himself. Someone is always either holding him or talking to him. We just can't get enough. 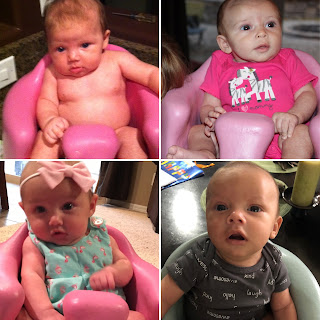