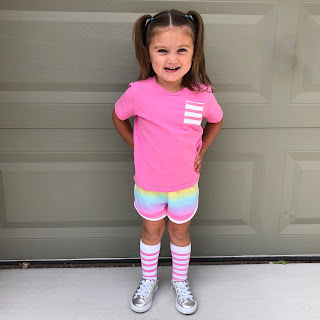 She's been my little baby for so long that it's hard to believe she's a bonafide big girl now. She makes sure to remind us all the time, too. "I'm getting way way big! Look at how I'm growing." "I'm a big sister, so I'm sooo big." "My fingers are getting way higher. I'm not a baby."

She loves that she's a big sister now. Like, that officially makes her not the baby, and she's all about it.

Perry is easily the sassiest of the bunch. I thought Grace was sassy, but Perry beats her by a mile. She tells everyone in our house what to do, and we all follow her direction, for the most part.

She's also the biggest Daddy's girl. It doesn't matter where he is going, she's always down to go with him. She loves to work out with him, snuggle with him, and wrestle with him. He's her favorite person no matter how hard I try.

This girl is hilarious, and she knows it. She speaks like a grown adult, so it makes everything even more funny. Everyone that comes across her tells us how much they love her sense of humor.

She loves her big sisters and has started showering upstairs with them. When she takes a bath in our bath, Gracie usually washes her hair for her. She's also fallen in love with baby brother. She loves to take care of him and is always holding his hand. Any time she walks by him, she needs to stop and give him a kiss. She also likes to tickle under his chin, and it's the cutest thing you've ever seen.

Perry is currently weighing thirty-one pounds and stands thirty-six and a half inches tall. She's barely moving into size three in tops and size three bottoms are a little too big around the waist. Girlfriend has got a tush on her, though, so it helps to hold her pants up. She is wearing size seven in shoes and six in moccasins. She loves to dress herself and always wants a dress with a skirt under it. I've tried explaining a hundred times why she doesn't need both, but it doesn't matter. That's what baby wants, and baby always gets whatever she wants.

I call her LuLu most of the time, which comes from her middle name, Louise. She also goes by Perr Perr, Perr Bear, and Perry Lou.

She loves her movies and is currently really into Bao, which is a short by Pixar. It's only a few minutes long, so we have to start it over constantly. She calls it "the one where she eats". Perr is also into Frozen and loves Dr. Seuss' the Grinch.

She's still obsessed with her blankies and has a million. They're all the bamboo muslin swaddle blankets, and there is always one near her. She got a new blanket with her name on it recently and has been sleeping with that every night.

Perry loves to play with the big kids on the street and has gotten bulldozed a time or two, but she still hangs. She'll get right in the mix of their street hockey game, and kicks the kickball before running the bases. She loves to color and make pictures, which she calls surprises, for everyone. She also loves her Care Bears and always has a baby around whether it's a doll or just an imaginary one in her arms.

She has been loving to trace her name lately, so she brings me papers all the time and asks me to write all of our names on it. Then she'll sit there and trace them all. I think this comes from watching the girls do homework, and she really wants to be just like them. She traces her name at school, so she wants to practice at home, too.

She's very smart and can count to at least twenty. She knows all of her colors and shapes, and she's working on letters and numbers in school. Her friend Acelyn is in her class, and she gets to see Ava in the mornings, which makes it nice because she loves going. She also loves all of her teachers, but she won't call them Miss Janine or Miss Jojo. They're on a first name basis and go by Janine and Jojo.

Perr's favorite foods include anything and everything. She'll eat steak, chicken, green beans, asparagus, and pretty much anything else you give her. She's definitely the best eater of the bunch. I'd say her most favorite thin to eat is Daddy's egg and cheese burritos. She'd eat them for every meal. In fact, he'll make a batch, roll them up, and stick them in the fridge. Then we just heat one up whenever she wants a snack. Girlfriend is all about the gummies, too. She doesn't care if they're gummy bears, fruit roll ups, or fruit snacks, she'll eat them until you make her stop. She also loves sliced peaches, strawberries, and nutella with crackers.

She has been begging for weeks to start dance class, so that is her next adventure. I can't wait to see if she actually listens and does what she's supposed to. She's been practicing her splits, which she calls her slips. They have this thing called Tumblebus at school, which is just a school bus full of gymnastics equipment. She started that a few weeks ago and is crazy about it.

Like we've done with the other girls when they turned three, Perry started her annual twenty question video this year. Apparently, she really loves pink, purple, and chicken nuggets with ranch.


This little spitfire has her daddy and I wrapped around her finger. She can do no wrong in our eyes. Picking her up from school is one of the best parts of my day, because she always carries her backpack on one should and gives me the tightest hug. She's the cutest little booger, and I will never get enough of her kisses.