My little boy is already a month old! I'm not even sure that's possible. I feel like we just left the hospital yesterday. 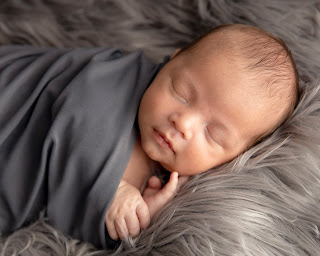 He's been the best baby we could ask for. He hardly ever cries. When he's awake, he just hangs out looking around, although he is still sleeping most of the time.

This little guy is starting to get big already. I weighed him at home on his one month birthday, and he was eight pounds, nine ounces. At the doctor a few days later, he was nine pounds, four ounces. This kid is bulking up like a champ. His cheeks are my favorite. He's also grown to twenty-one and a half inches long. This puts him in the fiftieth percentile for height and twenty-fifth for weight. That's pretty good for being born three weeks early! He's already bigger than Charley was at this age and is quickly catching up to where Grace was at. 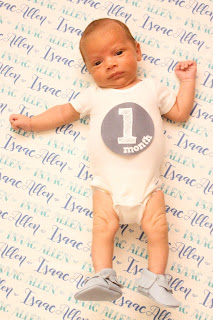 Baby Brother is what he currently goes by. It still feels weird to call him Isaac. We also call him Bro, Dude, and Buddy. I'm sure somewhere along the way a nickname will stick with him.

He is still wearing size newborn diapers and clothes, but the clothes are getting snug. At least the onesies are. For some reason the newborn pants are still a little big on him.  I've put him in 0-3 month tops, but they're still too big. He's kind of in between sizes. I'm not trying to jinx anything, but the little guy has yet to blow out a diaper. 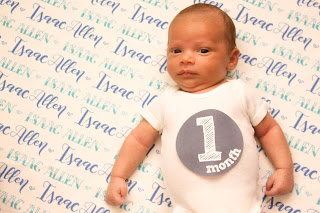 He is eating every two hours during the day and every three hours at night. We've gotten a few four and five hour stretches at night, but it's not the norm. Luckily, he just eats and falls right back to sleep, so I'm only up for five to ten minutes each time. He spits up little amounts quite often, with the occasional purge of everything in his belly. I'm hoping he grows out of that quickly, because it's my least favorite thing at the moment. 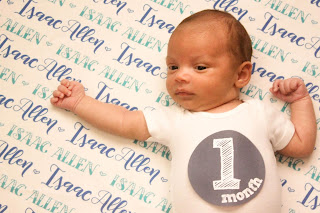 I've had to pump a few times, because I have so much milk that baby can't latch sometimes. I'll just pump a couple of ounces and then let him eat. I ended up getting a Haakaa pump, which is like a little silicone cup you suction on to the opposite breast while baby nurses. I've been getting close to two ounces whenever I use it, so I've got some milk stored up. I'm planning to do this as often as possible so I can have a lot of back up milk whenever we decide to put him in day care. I'm going back to work this week, and he'll be coming with me for a while. 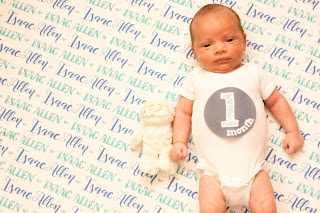 Brother hated the bath until we let him get in the tub in his little baby seat. Now he loves to sit in the warm water and look around. He had really dry skin, so we weren't giving him lots of baths, but it has finally gone away, and he has his soft baby skin back.

This baby is super strong. When you lay him on the ground, he rocks from side to side but hasn't made it all the way over quite yet. He can also hold his head up for about twenty seconds at a time. If you want to get him dressed, it can be a fight, because his little legs won't move unless he wants them to. 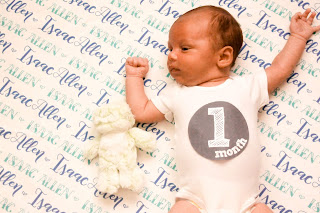 He takes his binky, but only after putting up a little fight first. Perry can get him to take it pretty well. She loves to check on him and tell me that he's in his basket "just chilling". She also loves to let him use her blankies and will insist that he wants it over his own. I tried telling her that he isn't a fan of the gold glitter and flowers, but she just says, "yes he is" and proceeds to cover him up. She's been watching me nurse him for a few weeks now and the other day, while holding him, she asked Isaac and I if she could feed him. We had to explain to her that she would be able to feed her own babies someday, but baby brother could only have Mommy's milk. She said, "I don't have milk in my boobies?". It was adorable and has us both cracking up. I really need to let her feed him a bottle of pumped milk. 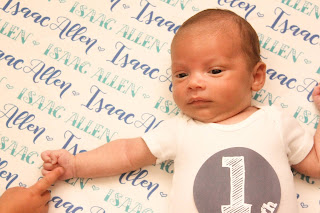 (Perry is always nearby and is always holding brother's hand.)

He loves to snuggle and prefers to sleep on your chest rather than in his bed. He does love his Moba basket and swing and will take long naps in both. At night he is currently in his DockATot in our bed. He is not a fan of being swaddled and grunts and fidgets until you let his arms out. He prefers to have one hand under his chin and another above his head or he'll just put both arms over his head. I ordered him a Kyte Baby sleep sack to try, so we'll see how he does with that. 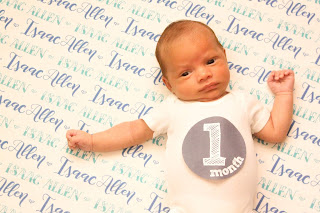 He sleeps in the car but does not like it when we stop. He'll scream and then quiet down again when we start moving. Not every time, but when he's not passed all the way out.

We did a mini photo shoot when he was one month old, and the pictures came out so cute! 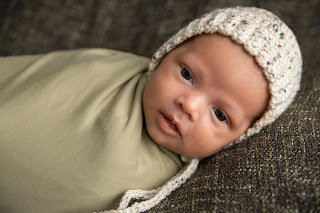 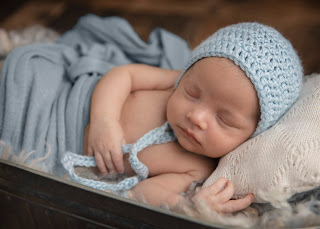 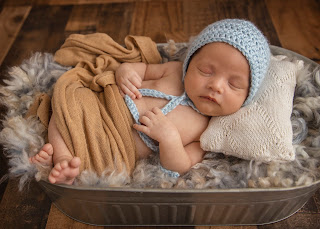 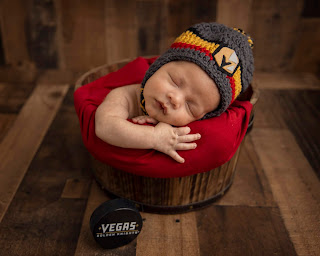 All of the girls are head over heels in love with this little guy. He has definitely stolen all of our hearts. They are constantly asking to hold him and everyone wants to help take care of him. I always said I would be fine with a bunch of girls, but I love this little guy to pieces. We're so thrilled that God blessed us with him and can't get enough of his sweetness. 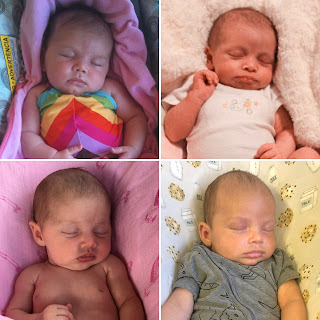