Wrapped Around Her Finger {Eight Months}

By Courtney Espejo - January 05, 2017
Little Perry Lou has hit the eight month mark this week. Isaac and I were looking back at her teeny tiny baby pictures in bed one night and melting over her. It's hard to believe she's the same baby. They really do grow way too fast. 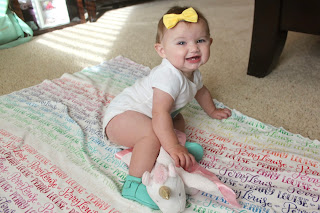 At eight months, Perry is still 16.8 pounds and 27 inches long. She's the perfect amount of squishiness that demands constant kisses. She's wearing size 6-12 months in clothes and size 2 in shoes. We're finishing off our last pack of size three diapers, and then she'll jump up to size four. 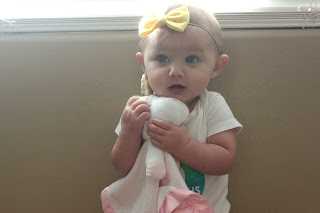 Perr has been teething for two weeks straight. She still only has her two bottom teeth, but this girl's top tooth is so close to breaking through, you can see it. It's given her a hard time, which I think is why she has been nursing so often lately. 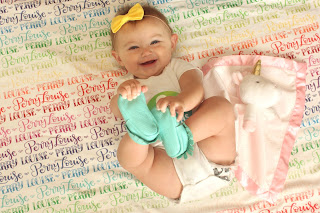 Her diet is still consisting of mostly breast milk. She eats like clockwork: three minute nursing sessions every two hours. This goes for day and night time, and she sticks to it almost perfectly. We try to give her a jar of food before bath time, but some nights she just pushes it away and isn't interested. Other nights, she'll gobble the whole thing down. She snacks on puffs and teething wafers. We're hoping to start more on small pieces of whole foods in the next week or two. 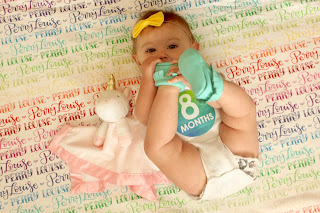 Perry still likes to go to bed early, somewhere around six thirty every night. Daddy feeds her around six when she starts to get a little fussy. Then she gets her bath, and I nurse her and rock her to sleep. She goes in her DockATot where she stays all night except for a quick feeding every two hours. 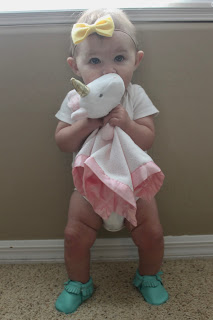 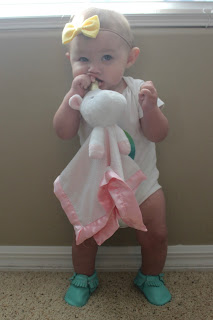 Baby girl can easily sit from a lying down position, and this month she has officially started crawling. Girlfriend can get across the room to get what she wants, and it's so cute. Grace and Charley giggle right along with her on either side. Perr also loves to stand. She will crawl to the ottoman and pull herself up to stand like it's the easiest thing. She's even started standing on her own for a few seconds at a time and can lower herself to sit without falling down. 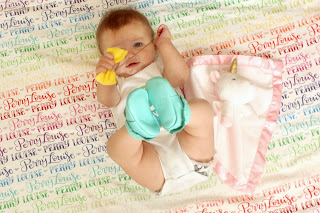 Although she wears bows every.single.day., Perr Bear has started to pull them down into her mouth and chew on them when no one is looking. This doesn't fair well for the linen ones, and a lot of them are now misshapen. Perry's hair is starting to really thicken up and looks pretty dark. One of my current favorite things is to snuggle with her and rest my cheek against her head taking in her precious smell. She's got me wrapped around her little finger, and I'm not letting go any time soon. 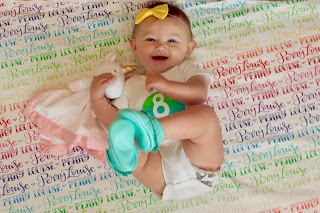 She is always making us all laugh, because she's so silly. The other night, I told her to go get Daddy so he could feed her some dinner. She dropped her toy, turned around, and crawled right to him in the kitchen like she perfectly understood what I told her. This little cookie is smart.

This month, she continues to say dada and mama, but she has also added a gaga sound and calls Allison "auntie", although it comes out more like "ahh-teee". She loves to squeal and listen to her own voice and her sweet giggles get us every time. 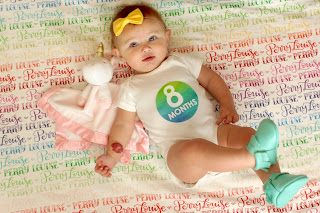 Baby doll will be starting day care this week, and although I know she is ready, I'm not at all. She loves to play with other babies and is getting so bored sitting in the office watching Book of Life all day, every day. This is my first baby that I've gotten more than two weeks with. She has barely left my side for the past eight months, and I'm not sure what I'll do without her. The biggest concern is that she won't take a bottle. I've been assured that after a couple of days, she will eventually take it, so I'm kind of banking on that. For now, we'll be working more on other foods, so she can eat something while she's there.

I love this little squish more than ever. She's the sweetest, happiest, go with the flow, loving baby, and we're all pretty obsessed with her. 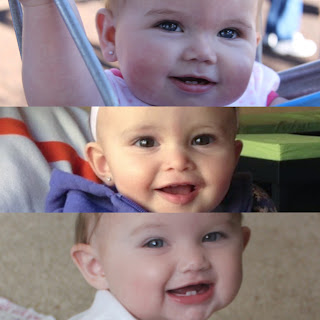