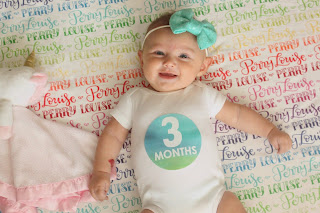 She's still the easiest baby, and we still can't get enough of her.

This month, when Charley and Grace aren't laying on top of her, smothering her in kisses, I find myself snuggling her to sleep, because I know her baby chapter is closing quickly. 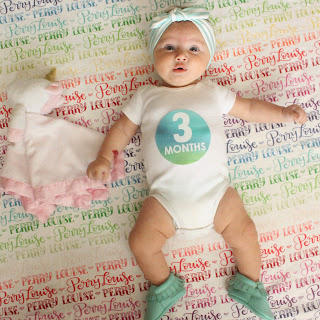 She is starting to pull herself up into a sitting position, and she can get her head and half of her belly off the ground already. She is also rolling from side to side but hasn't made it over just yet.

Perry is definitely a mover. She'll be laying in her play gym and the next minute she's sideways with it down on top of her. She loves to kick her feet and push her toys around with them. She also loves to stare at the ceiling fan and even smiles at it on occasion.

For now, she's still at work with us. As long as she's her sleepy little self, we'll get to keep it that way. Since she's been with me twenty-fours hours a day from day one, I feel like I'm going to have a hard time letting her get away from me. Her current schedule is close to the same every day with me waking her up around six o'clock. We get to work at seven when she eats and falls asleep for a nap. She'll wake up to eat and sometimes play in her play gym before another nap. Around two she wakes up for good and then takes a nap at home around five o'clock. The bath is one of her favorite things, and on the rare occasion that she's crying, we'll put her in to calm her down. This past week, she started splashing around a little and using her legs to move lower on her bath seat into deeper water. We've really got to watch her in there. She's been getting a bath around seven each night followed by nursing and bed time. 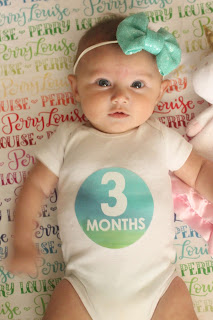 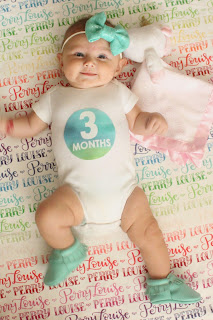 This morning, she weighed in at about twelve pounds and is about twenty-three-and-a-half inches long. She's in size 0-3 month clothes, and they fit her perfectly. We've tried one 3-6 month outfit, but it's still a little big. She's still in size two diapers and size one shoes.

Perry still loves her bamboo muslin blankies and holds them tight in her little hands, while rubbing it on her face as she falls asleep. I think that's her favorite thing in the world at this point - besides mama's milk of course. She's currently eating about three ounces every two-three hours during the day and every four-five hours at night. I only know that, because she finally took two bottles last week! She would only take them from me, but it's a start. We're going to get Daddy in on the action next week to get her ready for day care. 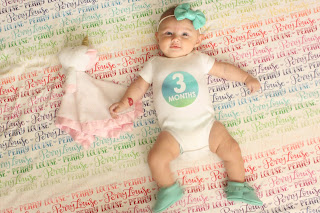 This month, Perr found her tongue and loves to stick it out and spit out bubbles. She's been drooling like crazy lately and loves to chew on her little knuckles. She also found her legs and wants to stand all.the.time. She's pretty good at it, too, and can hold her self up with a little bit of help in the balancing department.

Perry is a lot like Gracie in that she loves to watch TV. So far, Tangled has been the favorite, but she also loves Goldie and Bear. I've caught her watching soccer and even baseball, although that one put her to sleep pretty quickly.

Baby girl loves to smile and is starting to respond and can hold gurgling conversations. She likes her binky more, but she still doesn't love it. The DockaTot is still our favorite thing. This kid sleeps so well in it. I love having her right in between us, because we both steal cuddles in the middle of the night without worrying about her. 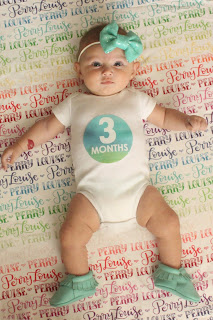 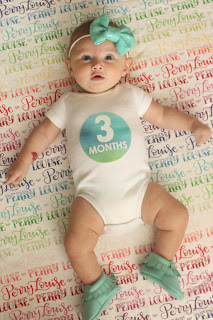 Perry has been the greatest addition to our little family. Her big sisters love to talk to her and laugh like crazy when she coos back at them. They love to help with anything she needs and always want to hold her. Daddy and I always want to hold her, too, so she gets lots of love all the time. I love having her with me every second of the day and cannot stop myself from kissing her constantly. 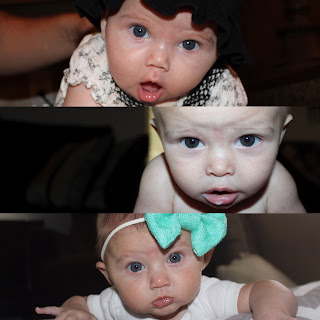