By Courtney Espejo - November 26, 2019
Our little smiley guy is seven months old today. We're on the downhill slope to his first birthday, and I'm not sure I'm ready for it. 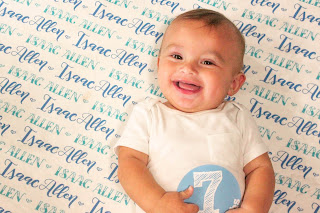 I'm not going to lie. I couldn't wait for him to get to this age. Isaac was so paranoid about every sound and movement the baby made after his first boy was born, that he had me paranoid, too. First, we were worried that he wasn't making eye contact. Then he wasn't smiling. Then he didn't laugh out loud. I remember thinking when he was teeny tiny that I couldn't wait for him to be bigger, so I knew that he was OK. Well, guess what? He's just fine and does all of those things plus more. He also tries to talk to us in long sing-song noises, but he hasn't made any distinct mama or dada sounds just yet. 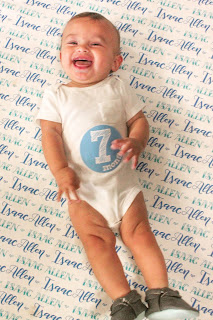 This big boy can sit up on his own now, which is so fun. He loves to sit on the floor and play with his toys, and he lights up when you call him "big boy". When he's on his belly on the floor, he spins all around to get what he wants. He rolls back and forth, and we frequently find him across the room from where he just was. This guy is a mover and gets called squirmy wormy often.

Other names Brother goes by are Bro Bro, Broski, Bubbas, and most often - Brudder. Perry has recently started calling him Brud, which is pretty funny. 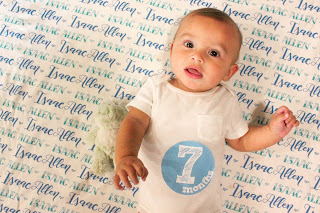 Brudder is still not amused by pureed baby food. He must have a sophisticated baby palate. This kid wants the real stuff and has started eating tiny bites of our food. Some favs are Lucille's tri tip, biscuits with apple butter, mac and cheese, bananas, Hawaiian sweet rolls, sausage, and whipped cream. We've kind of just been giving him everything, and so far, so good.

At seven months old, he is seventeen pounds, four ounces. By my own measurements, he is twenty-eight and a half inches long. (Grace was twenty pounds, Char was seventeen, and Perry was just under seventeen.) He is wearing mostly 6-12 month sizes but he also has some 12-18 month stuff. He's also still in size three diapers, which seem to be holding up for now. 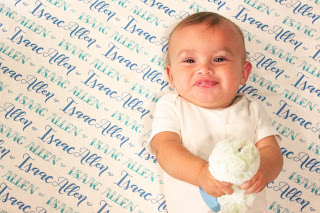 He has four teeth - two on top and two on bottom. His bottom gums are pretty swollen, and he constantly has his fingers in his mouth chomping away. I'm pretty sure there are two more bottom teeth on their way. When his fingers aren't in his mouth, you can more than likely find him chewing on his toes.

Bro Bro is doing a little better with sleeping at night. He kills us with his bed time, though. We try to get him to stay up until seven, but he wants his bath at six. Some nights, he starts to get fussy around 5:45, practically begging for a bath and bed time. After a bath - which may be his favorite thing right now - he gets lotioned up and I nurse him to sleep. He is still in his DockATot in our bed. He wakes up anywhere between one and three hours all night to eat for a couple of minutes and falls right back to sleep. He's usually up for good between 5:30 and 6:00, and that's mostly because we're getting ready to head to work and school around then.

Baby bro started day care this month, and he's still not fully adjusted. He's having a hard time taking a bottle, and it's hit or miss if he eats during the day. It kind of stresses me out, because he's there for over nine hours. When he does take a bottle, it's usually just an ounce or two. He did finally take a full one and drank it all the way through for the first time last Friday, so maybe he's getting there. We've tried four different bottles, but the little guy just prefers to wait for Mommy to pick him up to eat. I have been taking jars of baby food or bananas, but I think we may need to let him eat some more regular food at school so he's not starving himself. 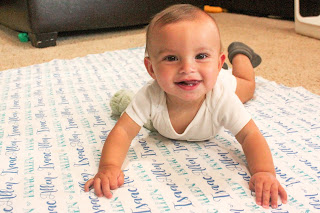 He loves to jump in his bouncer, so he hangs out in there when I'm busy cooking or doing laundry. Perry also loves to "wrestle" with him. Whenever he's on the floor, she'll lay next to him and pull him on top of her. Then they roll back and forth, while he giggles and tries to grab her. When Perr wakes up in the morning, the first thing she wants to do it kiss Brother.

He is the smiliest guy and people are always telling us what a happy baby he is. He gives the biggest grins and then hides his face in my shoulder, because he's a little on the shy side. He has started to reach for me whenever anyone else is holding him - even Daddy. If I walk by, he practically jumps out of his arms to get to me with his hands moving in circles and a big smile on his face. 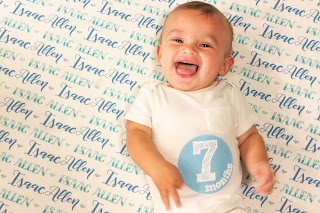 We love watching this guy learn new things, and our love for him is crazy. He's definitely the current family favorite, and I think every member of our family would agree. 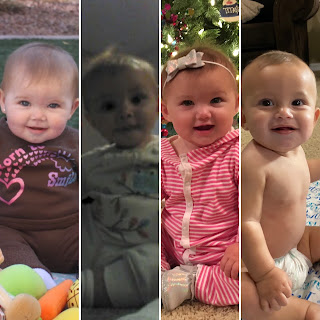