By Courtney Espejo - August 26, 2019
Baby Bro is four months old already, and I can't believe it. 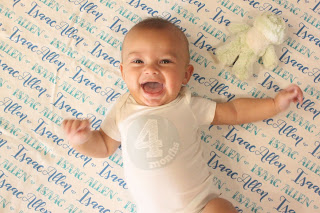 Time is flying, and this little guy continues to grow and move all the time. He's the sweetest, happiest baby that is almost constantly smiling.

He loves to watch his sisters and always smiles at their pictures when they aren't around. If he's not happy about something when we're at the office, I just walk over to the wall of their pictures, and he gets the biggest smile on his face. 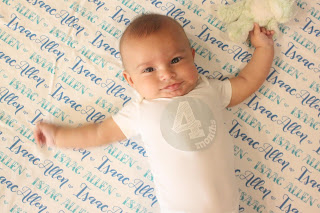 Teeth have to be around the corner, because this kid is always chewing on his hands. I mean all.the.time. He can't get enough of his chubby little fingers.

Baby Brother is still exclusively breastfeeding, and although it's OK for him to try some baby food now, I think we're going to hold off until he's closer to six months old. He is currently eating for about five minutes every hour and a half. I keep waiting for the stretch of time between feedings to get longer, but it seems like Brother is always hungry. The spit up has slowed down a ton, and we're definitely grateful for that. 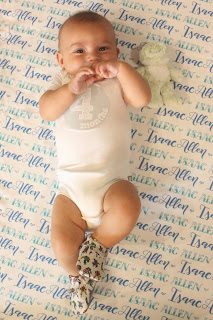 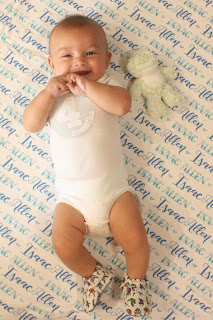 He is still refusing a bottle and a binky. I was terrified that life would be miserable without the pacifier, but it's actually been just fine. He's not very fussy, so we haven't even missed it. The only hard part is that he doesn't like to just lay in his rocker sucking on it while falling asleep at work. I have to rock him to sleep most of the time, but he's 99% my last baby, so I'm not complaining.

Baby is weighing in at fourteen pounds and twelve ounces. (Grace was sixteen pounds, five ounces and Char and Perry were both thirteen pounds, eight ounces.) He is twenty-five inches long putting him in the fiftieth percentile for both height and weight. I think it's pretty weird that both Grace and Char were the same length at this point, and Perry was an inch shorter. Basically, we just keep making the same babies over and over again. 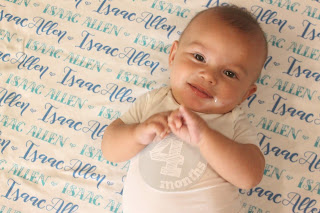 Little guy is wearing 3-6 month clothes for the most part. His belly is ginormous and fills most of his onesies out. Since we're in the middle of a Vegas summer, he's almost always in a onesie with no pants or shoes.

Brother has really started to enjoy playing on the ground while laying on his belly. He likes to look at himself in the mirror and chew on whatever toy is closest to him. He is rolling from his back to his tummy with ease but going the other way takes a little more work.

Baby Bro no longer sleeps swaddled since apparently that's frowned upon nowadays. All of my girls were swaddled well into the first year, but I keep reading everywhere that you aren't supposed to swaddle a baby after two months. Who knew? I still swaddle him for naps, but at night he wears a Zipadee Zip sleep sack and is doing well in it. I initially bought it because he likes to put his hands over his head when he sleeps, and the swaddle kept going over his face with them. It made me nervous, so I looked into some sleep sacks and discovered the new swaddling guidelines. 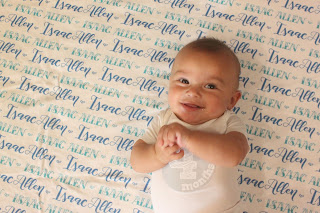 Our current bedtime routine is pretty similar to last month. Baby gets a bath around seven o'clock, nurses for a few minutes until he passes out, and then he goes in the DockATot until he wakes up to eat. Our norm is about a five to six hour stretch followed by two hour stretches until morning. He loves his bath, and will let you know that it's almost seven, and he's ready.

This little guy is really good with his hands and can hold on to his toys and switch them from right to left already. The doctor was surprised and said this was a six month milestone. He loves his Bella Tunno teethers and holds them tightly with both hands while he goes to town chomping on them. He's still loving his Copper Pearl blankets, and chewing on his fingers with his blanky on them might be his favorite thing right now. 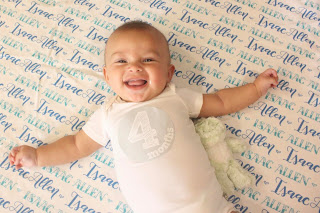 He's definitely a momma's boy, and I'm relishing in it. I love his snuggles and sweet grins and don't know if I'll ever get enough. I find myself letting him sleep on my chest before I go to bed and just enjoy the quiet time with him. Everyone always told me that there was something special about the bond between a mom and her son, and I finally get to see what they were all talking about. I love my girls to the moon and back, but something about this squishy little guy just makes me want to hold him all the time and keep him to myself. 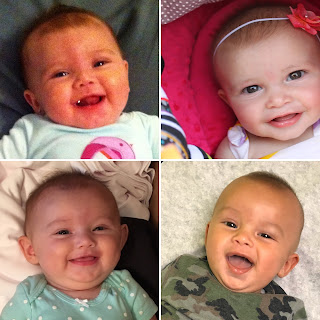