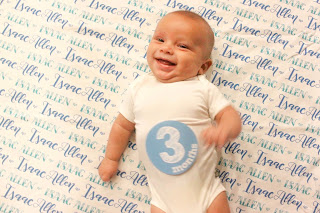 He's really a happy baby. He's always kicking his little legs and is smiling more and more every day. He only cries if he's hungry, and you've ignored the previous five minutes of him grunting and yelling "meh!". I like to think he's really trying to yell "ma!".

He still goes by Brother, but we've also been calling him Bro Bro, Brother Bear, Buddy, and Brudder. Whenever Perry comes close, she tells us to say, "sister is here". She'll get upset if you say, "There's Perr Perr", and quickly reminds us, "No! Say 'there's sister!'"

Brother is weighing in at thirteen pounds and is twenty-four and a half inches long. He's really getting chubby and has lots of rolls all over. For those keeping record, Grace was fifteen, Char was eleven and a half, and Perry was twelve pounds.

He's currently in size two diapers, and he's moved up to size 3-6 month onesies. That's pretty much all he wears right now, because it.is.HOT. He can barely squish his feet into his newborn moccs, so I think it's official that he's in size 2, although he doesn't really ever wear shoes (or socks - again, it's so hot!). 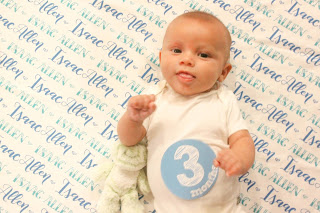 According to my nursing app, Brother is eating for an average of five minutes every hour and forty-two minutes. Sometimes he'll be hungry right at the one hour mark. He is still spitting up but not nearly as much or as often as he was before. He hasn't had a bottle yet, which may be a mistake on our part. We're going to try to give him one a day starting next week to get him used to them for when he's ready for day care. Wish us luck!

This month, he decided that he hates the pacifier. He wasn't crazy about it before, but he would take it whenever I gave it to him. Now he just screams if I put the binky in his mouth. I've tried four different types with no luck. 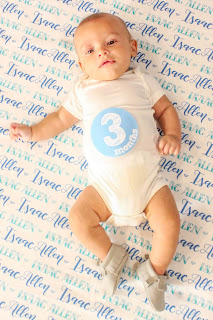 He is chewing on his hands all the time and usually has both of them folded together in his mouth. He also loves to stand and pushes himself up with his legs all the time. When he's laying in his play mat, he turns himself around so he's horizontal instead of vertical. He's good at scooting around slowly. He hated the play mat the first two months, but he's finally come around and really likes the lights that blink on the top.

This guy loves his Copper Pearl blankets. If he's crying and you put one on him, he'll stop almost immediately. He loves to hold on to them and will chew on his fingers through the blanket. He hated to be swaddled for the first few weeks, but he loves it now. Sometimes he'll still wiggle his arms out, but if his arms aren't tight by his sides, he'll wake up more. I usually redo his swaddle in the middle of the night after he gets it loose. 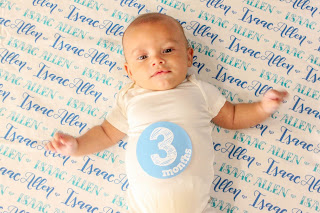 On weekdays, I wake him up close to six to change his diaper and feed him before we drop the girls off. Then we head to work, and he eats again before going back to sleep. He isn't a huge fan of riding in the car, though. He doesn't cry every time, but when he does, he'll usually stop if I roll the window down. He really likes to be outside, so I think the fresh air helps him calm down.

This guy loves his sisters. He always gets excited and kicks his feet faster when they talk to him. I have a big collage picture frame in my office, and he looks at it while I'm burping him. He'll always flash these giant smiles after looking at it for a minute. I think he knows that sisters are in all the pictures. 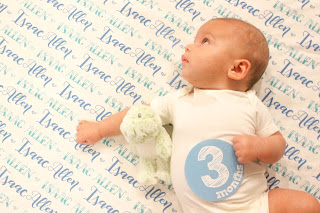 We've gotten into a solid bedtime routine with a bath at seven followed by him being swaddled and fed. If he's not already asleep, I rock him for a few minutes until he is, and then he goes in his DockATot. He'll usually sleep for five hours after that, but he's also done two, four, six, and seven hours stretches. After that first one, he's up to nurse every two hours.

He is holding his head up with ease now and is starting to gurgle and coo. He loves when we blow raspberries on his cheeks, and that always gets us the biggest smiles. 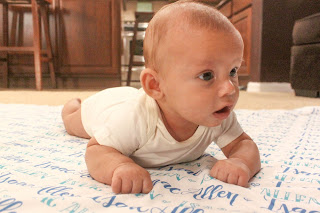 This little guy has taken over, and Char refers to him as Boss Baby. Perry still wants to give him kissed and hold him all the time, while Grace and Char are so good at carrying him and playing with him, while I'm cooking or doing laundry. He's constantly got someone hovering over him with endless supplies of squishes and kisses. We still can't get enough of this little guy! 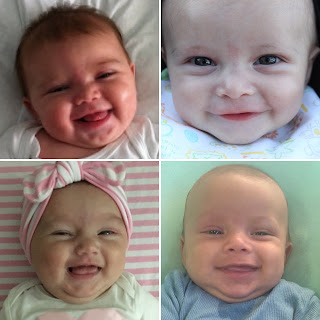