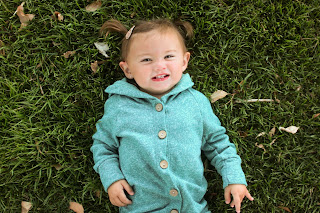 This kid is learning new words every day, and she keeps us laughing with her goofy sense of humor.

At eighteen months, Perry is weighing in at 21 pounds, 13 ounces (40th percentile). She stands at 31 inches tall (25th percentile). To say she's a little peanut is an understatement. 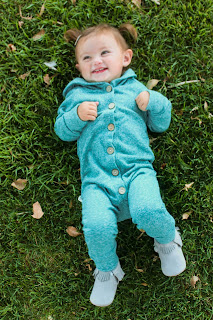 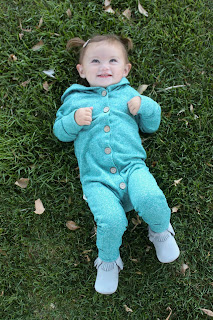 Perry has all kinds of nicknames. We often call her pipsqueak, because watching her little legs run all over the place is the cutest. She also goes by Perr Bear, Perr Perr, or Grace's favorite, Care Perr. Stink, Boo Boo, and Perry Lou will also send her running in your direction. 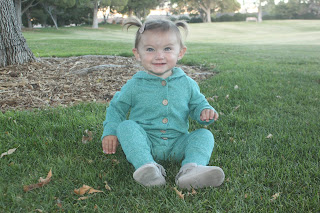 Currently, Perr's favorite foods are cheese, any kind of chicken, gummy bears, apple sauce pouches, strawberries, and asparagus. She eats all the time and is constantly asking for "nacks and joosh" (snacks and juice). Perry is so good with a fork and spoon and has been using them for a while now. She eats a bowl of cereal with milk at school every morning for breakfast and has transitioned to whole milk at school during the day. She only nurses at night now, and I'm planing to stop altogether next month in hopes that she'll start sleeping through the night. Her last two canines finally came in, so she's been much better lately, only waking every three hours to nurse and then goes right back to sleep. 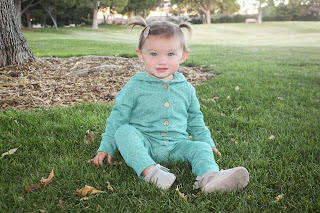 This kid talks like she's always known how. She answers "yes" and "no" to questions, copies anything you ask her to say, and speaks in small sentences. She went to throw something away in the pantry and noticed the trash can was gone. She walked around the island, saw it, and said, "Oh, ders tash". She's so smart! She loves to yell "goggie" and say "oof oof" whenever she sees a dog, and she calls every cat "Toodelsh". 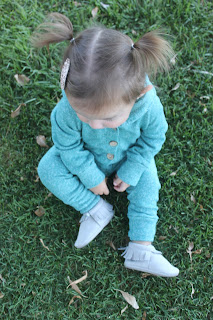 Perry loves to play outside and sneaks up onto the trampoline herself if the girls leave the net open. She loves "shides" (slides) and chasing her sisters around as they ride their bikes. Dancing is her favorite, and she bobs her head and bounces up and down to anything that even sounds like music. 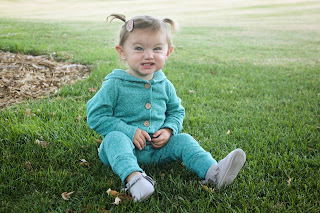 We are having so much fun watching this little girl grow up. She's so silly and always seems to roll her eyes at the perfect time. She loves her sisters more than anyone else, and also fights right in the mix with them now.

(In honor of this milestone, we are giving away a pair of Freshly Picked moccasins on our Instagram today, so keep an eye out for that!) 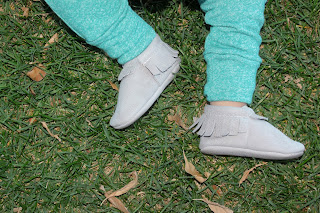