By Courtney Espejo - September 05, 2016
Another month has passed, and Perry is now fourth months old. That's already a third of the way to her first birthday, and I can hardly believe it. 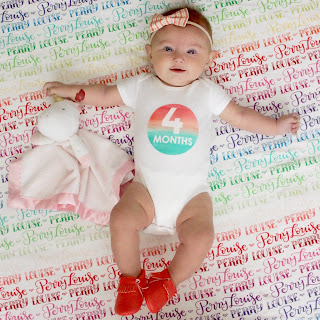 Looking at her first pictures makes it really apparent that she is growing and changing so quickly. It's so fun to watch her discover new things and become more aware of her surroundings, but it's also so heartbreaking that it's happening so fast.

At four months old, Perr Bear is weighing thirteen pounds, eight ounces and is twenty-four inches long, which her puts her in the fiftieth percentile for both. (Grace and Char were both twenty-five inches long, and Char weighed the exact same. Grace had three whole pounds on them, though!) 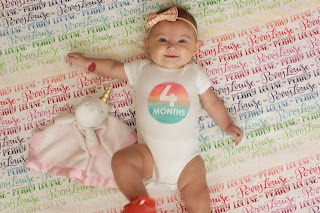 Perry is still the best baby ever, as far as I'm concerned. She's so mellow and has the greatest "go with the flow" personality. It's rare that she cries, but she yells out, "mahhhh", when she wants something. Her big sisters are convinced that her first word is mama, and she says it on a regular basis.

Perry loves to hold things in her hands, whether it's a toy, her blanky, or mama's hair. She's got a tight little grip, and tries really hard to get her toys into her mouth. Sometimes she makes it, and sometimes she just chews on her hands.

She has rolled over from back to tummy a few times now. We worked on it for the past week, and one day she just did it with ease. Now she loves to roll over whenever she's laying on the floor and kicks her legs up to hold her toes all the time. When she's being held, she almost always wants to be standing. This girl will arch her back and force herself up to stand. (I think she just likes to show off her chunky thighs.) 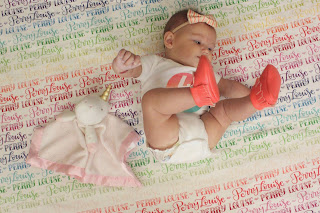 Anytime someone makes eye contact or talks to her, Perry will light up with the biggest gummy smile you've ever seen that just melts everyone. She looks like she's going to explode with happiness. I've been able to get a few giggles out of her, but she still hasn't let it out with a big belly laugh.

Perry loves to watch TV, and when football is on, she's mesmerized. Besides any type of football action, Perr's favorites are Goldie and Bear and My Friends Tigger and Pooh. She's also been enjoying watching Olivia at work. She enjoys watching her big sisters and all of their craziness. We were at the park yesterday, and she would giggle every time they ran by her. 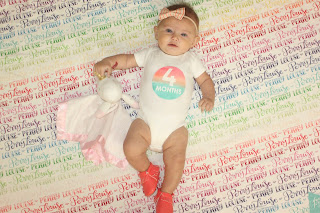 She's also a total Daddy's girl and has even reached for him already. Here I am trying to get her to give me a smile (she's currently got her first cold, so she's not feeling very well), and she grins at Daddy as soon as he walks in the room. She spent this past Monday just sitting in his lap for hours while they watched TV together. 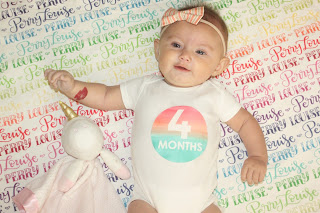 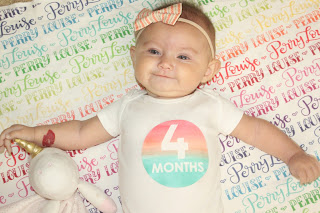 I got some organic rice cereal at the store this week, but we haven't tried it yet. I'm not prepared for her to be that big already!

She is still in size 0-3 months clothes, and they fit her perfectly. We've ventured into some of the cuter 3-6 month stuff, but it's still too long for this peanut. She's also still in size one shoes, but she's got a sweet stash of size two Freshly Picked moccasins that we're drooling over. We're also still using size two diapers, but we've moved on to Babies R Us brand instead of the Pampers. They just seem to hold everything so much better and aren't damp when she wakes up in the morning. 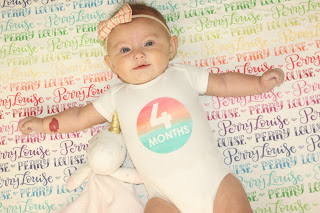 Perry is still a great sleeper. She has her bath, nurses, and goes to sleep around seven each night. Her first stretch of sleep is usually between four and six hours. After that, she'll wake every two to three hours, but each time she'll just eat and then go right back to sleep. I have to wake her up every morning, if Charley doesn't get to her first.

I'm convinced that we will be seeing teeth any day, because this kid is constantly drooling all over the place and chews on her hands every second of the day. I'm always trying to pull them out of her mouth and replace them with a toy. She also loves to suck on her bottom lip. 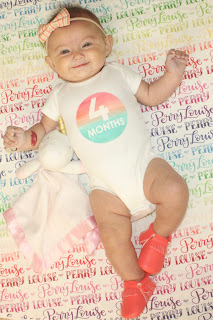 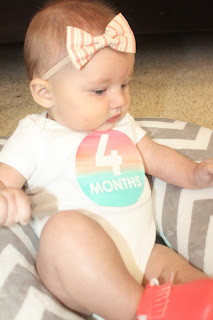 My favorite thing ever is when I'm feeding her, and she pauses to look up at me and give me the biggest smile. It's the sweetest thing in the world, and probably what I missed most after Char stopped nursing. Perr hasn't had a bottle in a few weeks, so I'm not sure exactly how much she's eating, but I would guess it's about 3.5 ounces every three hours or so. Sometimes she won't want to eat, even though I know she's hungry. I lay her down to feed her, and she just starts yelling at me. If I sit near the tub and turn the bath water on, she relaxes instantly and starts eating. Just the sound of the bath calms her like no other. Speaking of baths, they just might be her current favorite. She loves to sit in her bath seat and hold on to the wash cloth, while she soaks in the warm water.

Besides the bath, Perry's other love is still her blankies. I am telling you, the deluxe ones (made from bamboo) from Little Unicorn are the softest, thinnest ones I've ever felt. Baby girl just lights up whenever you put one near her and loves to snuggle them at any time of day. 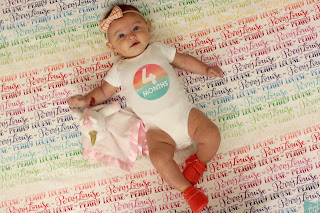 I am still bringing her to work with me every day, because she basically just sleeps and plays on her play mat. As long a she isn't bothering anyone or keeping me from getting work done, I'll continue to bring her. I love being with her every second of every day.

We love you so much, little peanut. 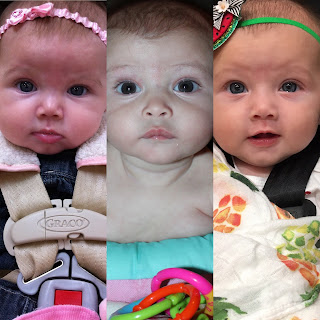