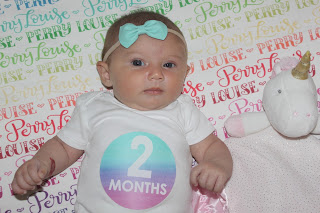 It's kind of weird, because I can remember her delivery like it was yesterday, but it also feels like she's been a part of our family forever. I literally spend every second of my day with her, and I wouldn't change a minute.

She's still the best baby ever. We're in a routine now, which makes things easier. I wake her up around 5:45 to change her and feed her before doing Grace and Char's hair for the day. Then it's off to school and work where she stays awake until around 8:30. She eats again around then and goes back to sleep until lunch time, when she eats again. Then she sleeps until about 2:45 when I feed her one last time before we head back to pick up her big sisters. She likes to stay awake for a couple of hours in the afternoon and evening to watch everyone and be a part of the action. She'll take an evening nap and then she goes to bed around 7:30-8:00. 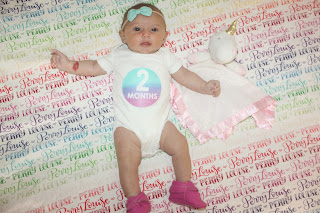 Baby girl is still sleeping in four to six hour stretches in between feedings at night. She doesn't cry (like hardly ever), but she wakes me up by fidgeting in her Dockatot, which is in between Isaac and I. It's been the greatest thing ever, because she loves to sleep in it. We bring it everywhere with us, and it may be my most favorite baby item at the moment.

At two months old, Perry weighs eleven pounds, two ounces and is twenty-two inches long. She's in the fiftieth percentile for weight and height. While Gracie was a whole pound-and-a-half bigger at this point, Perry is measuring exactly the same as Charley did at two months old.

She's still in 0-3 month clothes and has worked up to a size one shoe. Her bows are finally starting to fit her little head. She's just barely moved in to size two diapers after blowing the ones out two days in a row last week. They are a little big, but they also hold more. We ran out of size ones and have a lot of size twos stocked up, so that was an easy move. 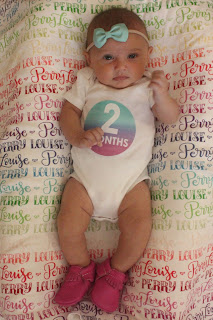 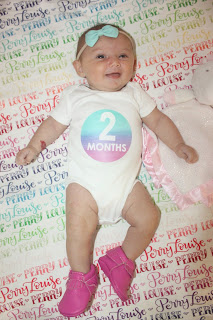 This month, Perry has learned to talk to us and smiles when she's making eye contact and you talk to her. It's the sweetest thing ever!

She's currently eating for four to five minutes every two to four hours during the day. Thankfully, she hasn't spit up at all for the past two weeks, so I think we've finally moved past that.

At this point, she's pretty much a pro at holding her head up and loves to look around. We were walking around Balboa Peninsula in Newport last weekend, and she hung out facing forward in her Solly wrap for two hours just taking in the sights. The wrap is one of her favorite things. She loves to sit close to Mommy and be able to fall asleep easily whenever she wants. 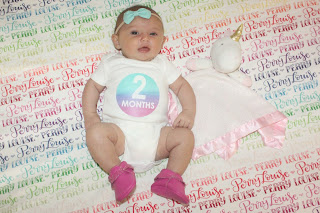 Another favorite of Perry's is her Little Unicorn Deluxe Swaddles. They are bamboo muslin, super soft, and really light, which is perfect for the hot summer days. She has one around her almost constantly and loves to rub it on the side of her face. This is how she puts herself to bed every night. Luckily, they have the cutest fabrics, so we've invested in quite a few of these awesome blankies. Perry still doesn't like her arms to be swaddled tightly, and she can easily work them up out of this material, which means she puts herself to sleep on her own every night after nursing.

She is taking the binky better, but she'll still fight me on it occasionally. She likes the swing and her pink piano play gym. She's started to reach for and hit the toys that hang from it, but she's the most fond of the mirror and loves to stare into it. Perry is also super fond of her new bath seat and loves to soak in the warm water while kicking her little feet. When she's awake, she likes to watch her hands move in front of her face and seems to be fascinated by them. 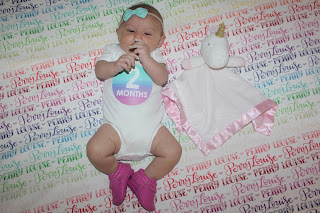 I forgot how fun it is to watch them learn and grow so quickly at this stage. Although I wish she'd stay little, we are having so much fun with her! 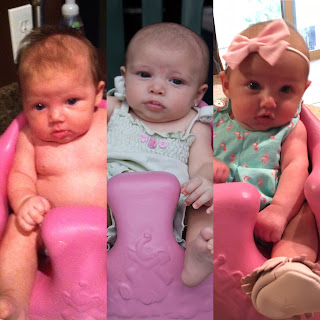