By Courtney Espejo - April 30, 2016
Can you believe my little baby Char Bug is already four years old? Three is still kind of a toddler, but FOUR...that's official big kid status. 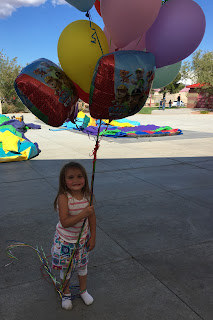 She's still the silliest kid I know and makes me laugh all the time. Isaac and I are always looking at each other like, "did she just say that?". She's the cutest little thing and loves to be a big helper.

As I've done with Grace, I started the tradition at Char's third birthday of asking her twenty questions about her favorite things. This year was a lot smoother than last, since she didn't get distracted as easily:

At four years old, Char is weighing in at thirty-eight pounds and stands forty-one inches tall. Gracie is her everything, and she wants to do everything her big sister does. Charley is the definition of a Daddy's girl and wants to be right next to him all the time.

Charley's teacher spoils her. She gets away with everything and does pretty much whatever she wants. She'll be moving into Pre-K this August, and we're so excited to see her learn even more in the coming months.

She loves to wrestle with Daddy and Gracie, and watching Paw Patrol on her iPad is at the top of her list of things to do when it's time to settle down for the night. She's pretty fearless and always has me squirming and praying she doesn't get hurt. She's definitely a free spirit and marches to the beat of her own drum. When someone tries to tell Charley what to do, she gets an attitude and does the opposite with a sly smile on her face, just to prove a point. She's her own boss, and she likes it that way.

Char loves to play outside with her friends and always wants to be in the middle of whatever the big kids are doing. If they're playing baseball, she wants to play with them. Riding bikes? She's in. Char loves her cousins, Presley and Chase, and is completely obsessed with babies. Whenever one is near, she's talking to it, trying to play with it, or holding it. It's the sweetest thing ever.

Char loves gymnastics (except the floor routine). She does so well on the vault, bars, and beam, and then she freaks out when she has to do something on her own where all eyes are on her. She gets shy and just sits down behind her coach. She asks to go all the time, though, and enjoys showing off her skills - "Daddy, watch me!".

Currently, Charley is obsessed with Paw Patrol, and her favorite is Skye. She also loves PJ Masks and Odd Squad. She isn't that into princesses like Gracie was, but loves them all the same. She loves anything with pink, sparkles, or unicorns and wants to wear a dress every single day. When I pick out pants for her, she gets mad at me.

Char is just fitting into size four clothes and is in between a size nine and ten in shoes. Her favorite foods are mac and cheese, chicken nuggets, avocados, and any type of berry. She hates tomatoes and likes her cheeseburgers with only meat, cheese, and ketchup. She loves to eat apple slices, but won't eat the peel. This kid loves her some sweet tea and drinks chocolate milk like it's going out of style.

She just starting showering on her own, and she prefers to dress herself, even though whatever she picks out almost never matches. Char is still the best sleeper ever. She naps every day, no matter what we're doing. She's been known to nap in the pool, on the ground at the park, and always in the car. She'll just get this sleepy look on her face and ask where her blanky is. The little, pink one is still her favorite. She takes it to school every day and sleeps with it every night. It's always a fight when it comes time to wash it. At night, Charley goes to bed easily all by herself. She's been the easiest kid ever in that department.

I've been really bad at keeping track of the funny things she says, but here are some of the ones I've managed to jot down in the past year:

Running downstairs to get away from Grace: "Nooo! Daddy, Grace said she's gunna beat my ax."

"No, I don't want chicken for dinner. Oh, it will make me big and strong? Yes, I will eat chicken."

Dad - Complaining about a loud guy in the restaurant we just left.
Grace - "Dad, we're supposed to fill people's buckets UP!"
Mom - "How does that work? Like if I said, 'Grace, you're so beautiful?'".
Grace: "Now that's how you fill a bucket up!"
Char - "And we don't eat caca!"

Reading the bible - "give me something good to eat."

"Is it ok if I get bless you on my blanket?"

"Mom, Grace scratched me really hard, and that wasn't nice. I want you to spank her."

"No, Toodles. You can only lick your fur and play around."

This little girl has brought so much to joy to us all. Gracie is terrified of pretty much everything, but if Charley is with her, it makes it all better. She's her best friend, and the apple of her daddy's eye. She's mommy's snuggle bug, and she loves to hug everyone she sees. Char is always right in the middle of anything that's going on, and she's usually making everyone laugh. We love her more than ever and truly enjoy watching her grow into the sweet, spunky, little spark plug that she is.