By Courtney Espejo - September 30, 2013
Next month our littlest pumpkin will be one-and-a-half. So crazy!! I cannot believe that I don't have a baby anymore. Maybe someday we'll start working on another one, but for now, we are just enjoying our time with our two sweet crazy girls. 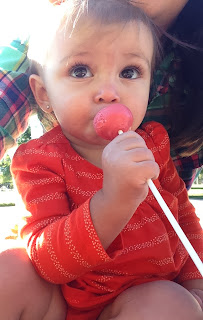 This past month with Charley has been one full of accomplishments. She has learned to say new words every single day including:

She has also moved out of her booster seat and into a chair at her and Grace's little table.

Charley loves her baby friend Jameson and knows how to say "JJ". She also likes playing with his big brothers (and Gracie's BFF's) Noah and Easton.

She loves playing with her cousin Presley, and especially likes to give her hugs and kisses. They are so cute, and I just love watching them together.

She is more in love with movies than ever. Her current favs are Brave, Wreck it Ralph, and Cinderella.

Charley loves to watch Grace and follow her every move. Now that she's a little bigger, she can do almost everything that her big sister can do and takes delight in copying her.

Her favorite food is still mac and cheese, but she also enjoys anything she can eat with her fork. I think she feels like such a big girl when she gets to use it.
She likes to snack on mini marshmallows, goldfish, and edamame.

She can do somersaults and will randomly bend over and tuck her head for you to push her tush over.

Char dances whenever she hears music, but really gets down when she sees sister dancing and shaking her groove thang.

She is so smart and can match things together and remember where they are hidden. Her teacher at school also told me that she sang her ABC's with her last week, but I haven't been able to get her to do it at home with me just yet. She pretends to reads books to us on the regular in the sweetest baby language you've ever heard.

One of her favorite things to do is take shoes into the bathroom cabinet and throw everything out onto the floor. Apparently, she thinks it's her shoe closet.

She loves brushing her teeth and gets really mad when we give Grace her toothbrush before Charley gets hers.

She has officially stopped nursing (whoo hoo)!! Now we are giving her one more month with the binky, and then she'll be giving that up as well. She has never been a huge fan of it and will even go to bed without one, so I don't think that'll be a huge problem.
Bath time has become so fun with Charley wanting to stay in and lay in the water on her belly forever. Grace has always loved to do this same thing, so we now have to girls laying in the water refusing to get out after their baths.

At bedtime, Charley will lay there and watch a movie with Grace and then just turn over and go to sleep when she gets tired - usually about 7:30 or 8:00. When she was born, I used to just swaddle her up and put her in the sleeper. She'd lay there until she fell asleep, and we're kind of back to that pace instead of me having to nurse her to sleep each night. It's wonderful.

Only three more months until potty training boot camp commences! Everyone say a prayer that she is as easy to potty train as Grace was. I've already warned Grammy that she may need to spend a week at home with her to get her on the right path to success.