By Courtney Espejo - March 30, 2013
My littlest ball of joy is nearing the one year mark. I'm so not even close to being ready for that. 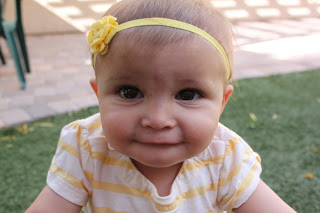 Charley is eleven months old, and baby girl is walking ALL over the place. 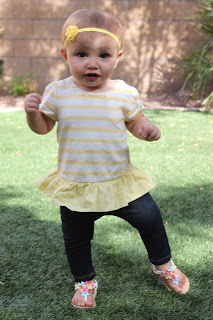 She can now squat down to pick up a toy and pop right back up with ease. When she stumbles while walking, she can get up without help as well. 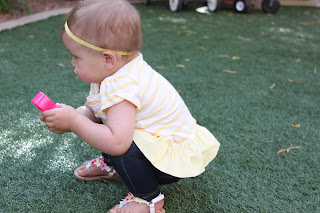 She is about twenty-eight inches tall. I'm expecting another growth spurt any day now.

She started doing much better in her crib this past week. I think it's because all four of her molars finally popped in.

Yup. This kid now has twelve teeth. I love this beautiful little smile that shows them all off. 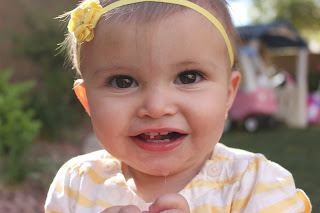 Charley takes two bottles of about four and a half ounces while Mommy is at work. After that, she nurses once or twice in the afternoon and then again right before bed. She also takes a couple of feedings at night if she's in her crib. If she's in our bed, she'll only wake up once to eat/make sure I'm still there.

She doesn't eat much baby food other than at school. We give her lots of cut up fruit, rice, avocados, mac and cheese, chicken...she basically eats whatever we eat. She's not very picky at all. 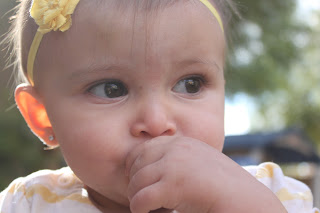 We recently upgraded her to a toddler carseat because her legs got too long for the infant one. I don't think she'll be facing forward for a couple more months though. She's not quite at that twenty pound limit yet, and she's much smaller than Grace was when we turned her around.

She started watching movies recently, too. I never knew how good I had it with Grace. You could put that kid in a swing with a movie and she'd watch it over and over for days. (I never really did that to her...promise.) Charley hasn't been a huge fan of TV. I mean, she'll dance to the Mickey Mouse Clubhouse theme song, but who doesn't? Baby girl finally watched a movie with Grace this week. Apparently, she's really into puppies (a lot like her sister), because her first favorite movie is Beethoven. I love this, because Geni and I used to watch this movie all the time as kids. It brings back fun memories I have with my own little sister. 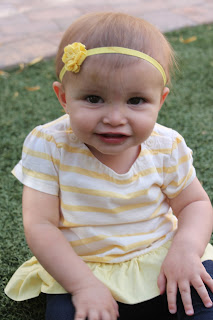 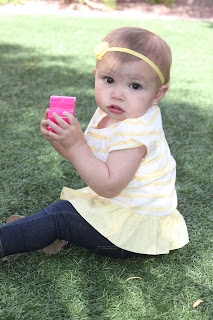 Charley loves to play with books. She likes the hard board books, especially if they're the touchy-feely kind, and carries them everywhere.

She also loves being outside. Walking around the back patio is one of her favorite things to do along with chasing bubbles.

You can almost always catch her taking things in and out of drawers. She loves to pull all of their swimsuits of of their drawer and put them back in. Somedays I'll find all of her socks or Grace's undies all over the closet floor. I guess it's her little way of saying "Charley was here." 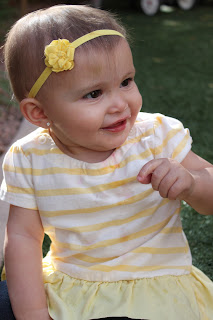 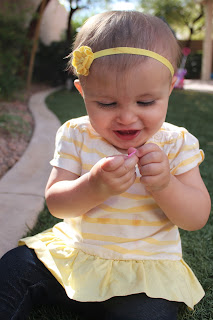 She's starting to fit in 12-18 month clothes, but they're a little big. She's still rocking the 6-12 month sizes. This is a bit of an issue, because Grace wore 18-24 month clothes the summer during her first birthday. Charley likely won't be able to wear any of those until next summer. You know what that means? You guessed it...she needs new summer clothes. Don't worry. I'm all over it.

She is currently in size 3 to 4 in shoes and loves wearing them. She likes to be fancy. 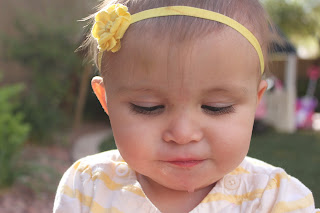 She's babbling all over the place and likes to repeat sounds. She copies you when you make different noises such as "yah yah yah yah" or "ga ga ga". She also loves copying Daddy's laugh. She's had "mama" and "dada" down for a while now, but those are her only distinct words so far.

Charley also loves to clap and does so whenever we say, "yayyyy!"

The little bug is growing so fast. She's such a sweety, and it's rare that you'll see her cry. She loves to smile and laugh, especially at Gracie. Watching them with each other is the sweetest thing (on most days). We are so lucky to have her silly little smile in our lives.

Happy Eleven Months, Charley Bug. We love you so so much!
Charley Milestones