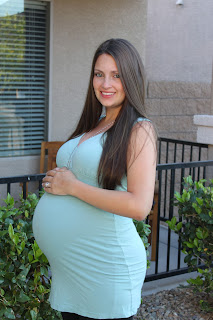 Baby is fully ready to be born should she choose to come today!

She'll spend the rest of her time in Mommy's belly packing on the squishiness.

We finally scheduled the Cesarean with the hospital, too!

This is super exciting because we now know the exact date when baby Charley will be here (unless she decides to make an early appearance).

That means we only have SIX DAYS to go until the little munchkin arrives!!

Side Note: I'm kind of OCD about numbers and only like multiples of 5 or even numbers. (I will make Isaac change the volume on the TV if he tries leaving it at 19 instead of 20.) Thankfully, both of my kids will be born in even numbered years on even numbered months and days...don't think that wasn't planned either. Odd numbers drive me crazy!

I feel like it will be pretty much the same as when I had Grace since the surgery is a Monday morning at 7:30.

I thought I'd be totally calm about it, but I think surgery is always scary.

As long as Charley comes out perfectly healthy, I'm ok with the rest of it.

I've been going to my weekly doctor check-ups, and this past week, she told me that I'm already starting to dilate and efface and baby is super low, so I have to rest and take it easy until she arrives. She doesn't want me going for walks or doing anything that may cause early labor.

This is totally different from my first pregnancy. The last few weeks I was doing everything I could do to get Grace to come. We tried walking, red raspberry leaf tea, "go into labor" cookies - nothing worked. Grace was content to stay right where she was forever.

This time, I'm not worried about any of that or wondering when Charley will be arriving because I know it'll be that day (unless she surprises us). This kind of makes the end of pregnancy a bit more relaxing since I'm not stressing and preparing for 'whenever' she gets here.

Another thing I learned at the doctor's office this week was that I haven't gained any weight in almost eight weeks. Not a single pound. I've only gained six pounds since Christmas. This statistic just amazes me because it doesn't seem possible. Especially since I eat anything and everything. Doc says it's perfectly fine though since baby is growing well.

I gained about fifty pounds when I was pregnant with Grace.

I've gained thirty-five this time around, but since I also started off fifteen pounds lighter, I'm a whole THIRTY pounds less than I was at this point with Gracie.

That's also hard to wrap my head around.

I'm even still able to easily wear my wedding ring!

I'm thinking this should make fitting into a bridesmaid dress eleven days after she's born at least a little bit easier :)

Another difference in this pregnancy is that I was positive with Group B Strep last time, and this time the test came back negative. It's not really a big deal, but I won't have to get antibiotics before delivery this time around.

Pica is another difference. If you've never heard of it, Pica is a disorder that occurs in about 20% of pregnant women. You get weird cravings for certain textures like dirt or powdered laundry detergent. Most of the time, Pica makes you want to eat these items due to the craving for the texture.

Luckily, I haven't eaten anything weird or even wanted to. I have some weird variation of Pica where I want to paint so I can smell it or color with chalk to see the grains move smoothly across the ground. I've also been writing with nothing but Sharpies at work because they write so smoothly and it makes me happy. My form of Pica is more visual and scent related. Pretty weird, huh? I've been assured that this will pass with the heartburn as soon as baby Charley is born.

I now have two carseats in my car, and Grace can see into Charley's from hers. She always looks over and asks "ah Chawyee" (where's Charley)? She is getting so excited for her to come. Grace also tells me that "Chawyee go to bet" at bed time and says "Chawyee showa ah Mommy" when I get in the shower. She loves to lay her head on my belly and snuggle with baby sister. It's so sweet. I am getting so anxious to see them together.

I still have not packed my bag for the hospital despite meaning to do it every night. Maybe tonight it will finally get done.

Other than that, I'm pretty sure we're totally ready for baby. Her crib is waiting for her to sleep in it, my breast pump is sanitized and like brand new again, all of her clothes are washed and hung in the closet, and Grace is ready for her baby sister.