By Courtney Espejo - November 27, 2011
I've decided to change these posts to "Last Week" instead of "This Week" since I always post them about the week that has just passed.
...Grace was perfectly fine until we put her in the bath Sunday night. She started having trouble breathing, and it only got worse when we took her out. We put her in her jammies and got into bed, but kept worrying because you could hear her struggling to breathe pretty loudly. Wondering whether or not we should take her to the hospital, we monitored her breathing all night. The next morning was just as bad only now she had this horrible sounding cough. There were no other symptoms, so we assumed it was croup (a virus that causes your voice box and throat to swell making it hard to breathe and causing a cough that sounds like a seal). I called her doctor and Grandma Lisa took her in first thing that morning. Grace did indeed have croup along with an ear infection. Say what?! How was she happy and playing one second and super sick the next? Dr. Vu gave her a steroid shot which helped almost immediately. She also got two prescriptions, and was back to her normal self the next morning. I did get to enjoy some amazing mommy/Gracie snuggle time Monday night which I took full advantage of: 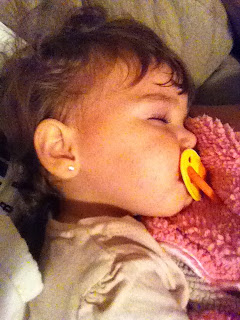 Dr. Vu also said that taking her outside and letting her breathe in the cold air would help her throat. After her bath that night, we took a walk around the neighborhood to check out the Christmas lights: 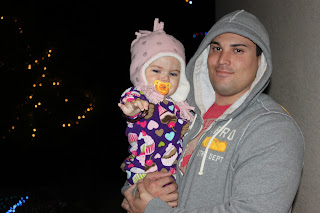 ...Grace spent a lot of time around the Christmas tree. She really loves it: 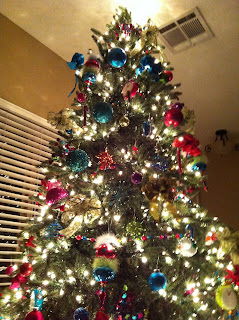 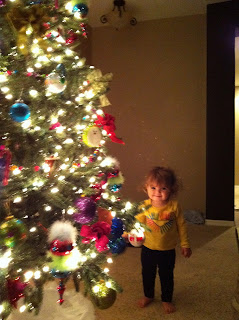 ...we had a fabulous Thanksgiving with our families.
...we spent a much needed three day weekend with our best friends at the cabin.
...we ate at Johnny Mac's (one of our favorite local spots): 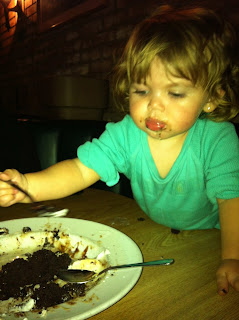 ...I saved the best for last. I was laying in bed watching TV and Grace was being abnormally quiet. I sat up to see that she had found my underwear drawer. She has been trying to dress herself lately, and decided to dress herself in my panties. The problem was that instead of putting her legs through the holes, she put her head through them. Isaac and I could not stop laughing at her. It was hilarious:
See ya next week :)
Weekly Update