By Courtney Espejo - April 17, 2011
...we all got the flu. It was horrible. Grace started throwing up Tuesday morning and had a fever Wednesday morning. It was her very first fever, so I guess we were pretty lucky that it took her ten months to get one. I took her temperature when she woke up and her back was so hot that it practically burned me. It was about 101.2, so I took her to my moms and headed straight to the store for some Pedialyte. Of course she wouldn't drink it, and I still had to get to work. I felt terrible leaving her because she was almost lifeless. She had no energy, felt miserable, and didn't really care where she was or what she was doing. She just wanted to sleep. That afternoon, I got off work, and we headed to the doctor. She had lost a whole pound, but the doctor reassured me that it was just a stomach bug, and she'd feel better soon. He was right, and the next day she was back to normal except that she'd throw up in the middle of the night for the rest of the week. Then it went to every other night, and now she's perfectly fine. It was pretty bizarre and seeing as how she sleeps in our bed, I had to wash sheets almost every day. I'm so happy she's feeling better, because it's so sad when your little one is sick and helpless. Luckily, Isaac and I both only had it for half a day and it's now moved on to the next victim.
...Isaac's dad took us shooting so I could practice using my new gun. I did so much better than I was expecting: 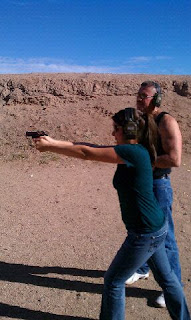 I even hit the same spot once or twice: 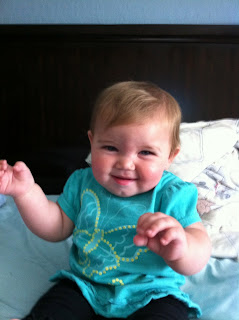 ...my mom got the stomach flu (thanks Grace), so we had to bring baby girl to work with us on Friday. She played with her toys on the floor while I worked, took a two hour nap, and even had fun playing in Daddy's office for a bit. I'm going to teach her to file after she gets the walking thing down: 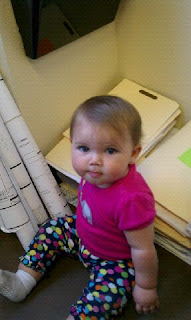 ...Grace learned how to "click":
...Grace and Ca$h played a lot. He always wants to lay by her, and she always wants to have whatever he's got. She'll crawl right over to him, sit on top of him, and take his toy. He's such a good puppy and let's her do whatever she wants to him: 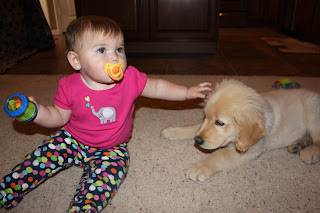 Sometimes, she's nice too and will even share her toys: 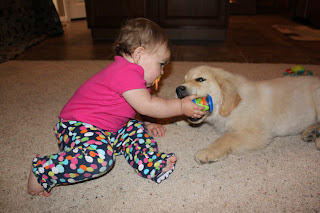 They really are best friends: 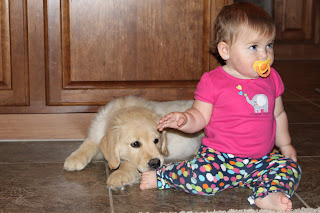 ...Ca$h got a new collar and went crazy trying to take it off:
...Grace got into her hair drawer. It's has all of her headbands, hats, bows, and barrettes. She had a blast throwing it all out for me to pick up: 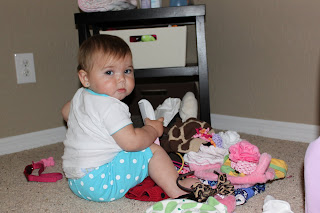 And then got super excited when Daddy came into the room to rescue her: 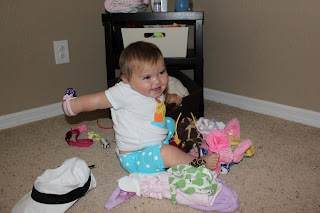 ...we went to the Henderson Heritage Days Parade and Car Show with Kasie and Jeremy.
...we dyed Easter eggs since we'll be out of town for Easter next weekend.
It was a crazy week with the flu going around, so we're definitely looking forward to getting away next week!
Ca$h Grace Weekly Update