By Courtney Espejo - April 14, 2011
Can you believe we only have two months until Grace's first birthday?!?
Me neither!!
I guess it's time to start planning.
We're going with an Olivia theme.
I can't wait for it all to come together, because it's going to be precious! 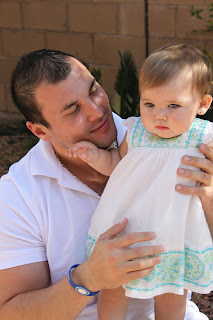 Anyways, what is the little pumpkin up to at ten months?
She is 22 pounds and three ounces.
A LiTtLe chub was lost last week thanks to the stomach flu, but she's all better now.
Grace can stand on her own. She'll let go of whatever she's holding onto and just stand there until she realizes that nothing is supporting her. Then she gets scared and sits down slowly and carefully.
She has also taken some baby steps. A walker is in our near future.
She has definitely gotten taller, but we don't have another wellness check up until twelve months to get exact measurements.
Grace is still not the best sleeper.
I'm trying so, so hard to get her to sleep (at least part of the night) in her own bed.  It's kind of annoying that I can't put her down for a nap and get stuff done around the house for fear that she may wake up and crawl off the bed. I have to stay right next to her to keep an eye on that. She wants nothing to do with her own bed though. I'm pretty against the "cry it out" methods. I tried it ONCE and bawled my eyes out. I've read some books about helping baby sleep better, but it seems like nothing I have come across is right for us. Don't get me wrong, I love co-sleeping one hundred percent of the time at night. Since Grace is still breastfeeding, it's super easy to feed her without actually waking/getting up, and she falls back asleep much quicker. It's also so special to wake up and snuggle with my sleepy, cozy little one, and I wouldn't change that for the world. I just wish she'd nap on her own. Is this even possible? To co-sleep at night, but have baby nap in her own bed? That's something we will definitely be working on over these next few weeks.
Another issue that we've got going on is the iron supplements. At Grace's last wellness check up, Dr. Vu checked her iron levels. He wanted them to be an 11, but hers were 10.7. Since they weren't quite where they should be, we are supposed to be giving Grace a multi-vitamin with iron. The problem is, it tastes HorRiBlE!! She doesn't want it, and I don't like making her choke it down. Isaac gets to do that each night. I've tried mixing them with fruit, juice, and milk, but they're so strong that I just can't seem to hide them in anything! I try to get Isaac to give them to her before her nightly bath, but he always forgets. He gives them to her after her bath which leaves her smelling like nasty vitamins until the following night's bath. Has anyone else had to give their babies these awful drops? How'd you do it?
My ten month old little baby is turning into a big girl right before my eyes!
Grace Milestones