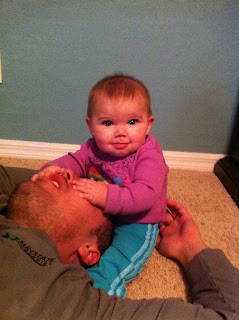 She's growing up faster each day and learning so many new things.
It's hard to keep up.
She doesn't have another wellness check-up at the doctor's until she's 9 months,
so I weighed her at home, and she's only 20 pounds!!
I say OnLy like that's not a lot.
But really...she was 19.75 at six months, and 1/4 of a pound gained in one month is the least she's gained in a whole month!
Some of her seven month accomplishments:
~ She is getting pretty good at standing while holding onto something or someone.
~ She can go from holding on the couch, to the ottoman behind her, and back again.
~ She really lights up when she accomplishes something new, and you can tell that she's so proud.
~ This month she's added peaches, bananas, and prunes to her diet.
~ We're still waking up about three times a night so she can eat.
~ She loves jewelry (especially diamonds). If you're wearing any, she's likely to grab it.
~ We've been taking her outside a lot more, and she loves to see new things and feel them.
~ She's discovered her feet, so they're always either in her hand or her mouth.
~ She has two bottom teeth.
~ She wants to be standing ALL the time. She always grabs your hands and pulls herself up.
~ She's now very aware of people that she doesn't know. She'll watch them and pay attention to where they're going.
~ We have started giving her apple juice in a sippy cup.
Grace is such a big girl now.
I can't believe that seven months ago she was this small:

Soo crazy!!
I can't wait to see what she does in the next few weeks :)
Grace Milestones