By Courtney Espejo - December 05, 2010
This week, Kasie and I decided to cook Jambalaya. Jeremy (her fiance) came home from playing football in Canada this week. Since it's his favorite food, we had to make it for him. I was also pretty excited for Grace to finally meet him.

She was really excited to see her Aunt Judy! 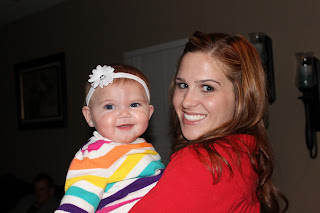 I was a little nervous because I've never had jambalaya before, but it was actually delicious!

We started out by chopping up some chicken, shrimp, and a special type of sausage called Andouille. 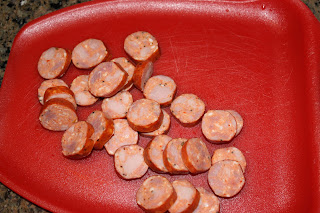 Next, you saute some veggies and then add chicken stock and rice. The rice absorbs most of the liquid after cooking for about twenty minutes. 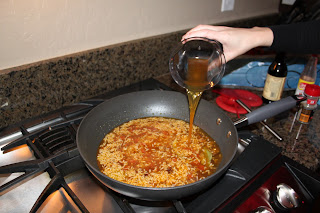 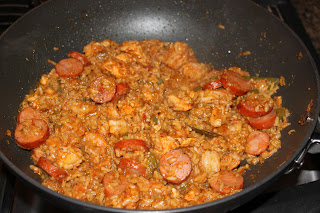 I don't know much about Jambalaya, but I read online that it's great with french bread and a salad, so that's what we ate it with. 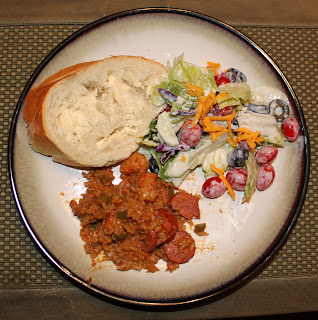 It was amazingly good. This recipe was pretty spicy, but the bread and salad were nice ways to counter it.

Interested in trying it out? Here's the recipe! I highly reccomend it. This is one meal that we'll definitely be making again.
Cooking

...Daddy shared a sweet snack with the girls: ...Grace got a new hat, sunglasses, and a horse named 'Dakota'. She proudly showed them off when we got home from school/work: ...she loved her hat so much that she wore it all afternoon while we played in the backyard and watered her flowers: (They actually started growing!) ...we practiced counting to ten in Spanish. Grace gets to frustrated with herself when she can't do something perfectly. She's definitely a perfectionist like her mama: ...Charley played with Elmo and tried to brush her hair: ...Grace went to swim lessons and did so well. She's this close to getting moved up to the next level: ...the girls dyed Easter eggs at Grammy's house, had their first Easter egg hunt of the week, and even made the cutest Easter cupcakes: ...we played in the backyard some more, and Charley really showed off
Read more