By Espejos - November 14, 2010
I know it's hard to believe, but Grace is already 5 months old!! She doesn't have another doctor's appointment until she is six months old, so I weighed her myself and found out that she's now 18 pounds, two ounces...such a chunker! 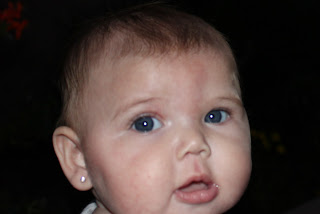 So, what is she up to:
I can't believe how fast the time is flying by. We are definitely trying to enjoy every second, because it's obvious that she won't be our little baby for much longer.
Grace Milestones