By Espejos - April 20, 2010
We are now 32 and a half weeks pregnant!!  That means in about 52 days (or 7 and a half weeks, or 1,240 hours) little Gracie should be here.  She has been really moving like crazy for the past two days.  Last night I was laying on my side trying to fall asleep when all of the sudden she started kicking and punching (or practicing her gymnastic skills) all over the place.
I had Isaac put his hand on my belly so he could feel all of the ruckus going on inside.  He wouldn't believe that it was her doing all that moving.  He kept telling me to stop flexing my stomach muscles.  Since he didn't believe it, I turned on the light to see if he could actually see her moving around.  He put his hand on top of my belly, and Grace instantly kicked his hand right off!  He got this crazy look on his face and could not believe his eyes.  You could see my belly moving all over and elbows or feet protruding from either side.
After seeing her move, Isaac decided we should give the heart listener one last try.  We've tried to hear her heartbeat what feels like thousands of times before, but we decided that since my placenta was on the front of my belly, it was probably blocking out all of the sound.  When he set the speaker on my belly last night, we heard her heartbeat loud and clear.  It was so neat to be able to lay in bed and hear Grace's heart beating away all while she was jumping up and down and doing somersaults.

It took a while for her to calm down so I could fall asleep. She was still all night and all morning until just after we had lunch. Then she went right back to doing back handsprings and cartwheels. She has been going strong for about an hour now. I'm sure that she'll be in the Olypmics someday with all the hours of practice she's been putting in!

Here is a new belly pic as of this morning: 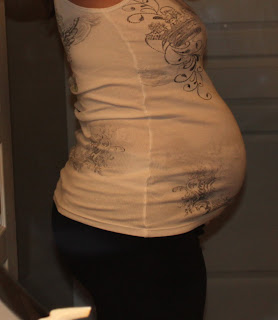 It's really getting out there! This week, Grace is still working on gaining fat. She should finally be starting to lose that wrinkled, alien look and start to fill out.  Also, her lungs should be mostly complete so if she were born now, baby would be able to breathe on her own. She can also tell the difference between night and day now as her eyes can sense the light, and she will continue to gain about half a pound a week from now until she is born.

Only 7 and a half weeks to go :)
Pregnancy